Don’t forget about the new aerobics studio fitness from now through August 7.

Take a break and get fit with live stream fitness classes — from Gator fit to yoga to Hip Hop dance to Zumba to yoga and more. All activities, except online sports, will be hosted on Zoom at uhd.zoom.us/my/stayfit. 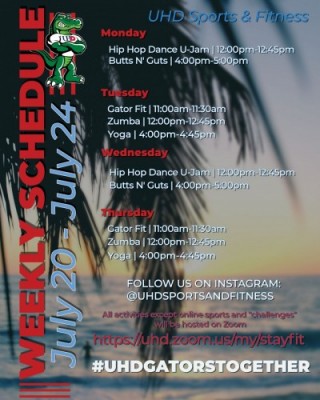 Sports & Fitness has implemented some security measures to prevent hacking incidents, including encouraging users to download necessary updates to their Zoom client. As an added measure, there is a Zoom waiting lobby for the classes. In addition, users will not be able to chat during the class or change their name. If misconduct is observed during the sessions, users may be removed from the class.