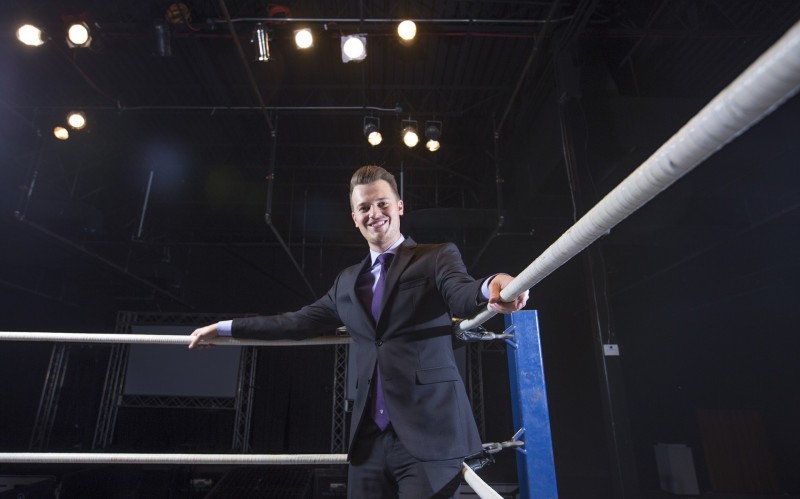 It's a Saturday night in Texas City's World Gym. A sold-out crowd files into seats for an evening of high-flying action courtesy of the Reality of Wrestling. Before the first match, the dapper Brad Gilmore steps into the ring and welcomes the crowd to the arena.

"Houston, are you ready for the Reality of Wrestling?" he asks the raucous fans.

The crowd erupts with a roar as Gilmore, in suit and tie, soaks in the excitement. After introducing the National Anthem and the opening bout, he takes a seat next to his broadcast partner, Matt Topolski.

On this evening, Gilmore is filling in as in-ring announcer but his full-time role is color commentator for the Reality of Wrestling's regular broadcasts.

Gilmore is among the many University of Houston-Downtown Communication Studies students applying what they've learned in the classroom to professional careers.

"It's all about telling a story," said Gilmore, a senior rhetorical/public communication major. "From the start of a match until its finish, I help communicate what's going on the ring and enhance the action."

Gilmore has been calling matches for Reality of Wrestling since 2014. A longtime wrestling fan, he stumbled upon a Twitter post seeking an announcer for a Houston-based wrestling promotion owned by former World Wrestling Entertainment champion Booker T.

Gilmore replied to the Tweet on a whim but didn't think he'd get a response. He wasn't experienced as a wrestling announcer but was accustomed to speaking and performing in front of audiences.

"I've always been told I have the gift of gab," he said. "My grandparents used to call me ‘motormouth.'"

What he lacked in experience, he made up for in ambition. Gilmore admits that his audition as a play-by-play announcer was less than satisfactory. Still, he received a call asking him to serve as an in-ring announcer, announcing wrestlers and energizing the crowd. He later moved into his current role of color commentator, adding his insights to matches and helping bring wrestlers' characters to life.

"Announcing wrestling goes beyond telling viewers what I am actually seeing in the ring," Gilmore said. "We're trying to help the wrestlers convey their characters. They may only have 30 seconds of on-air interview time before or after their matches. It's up to me and my partner Matt to get their characters across to the television audience."

One of Gilmore's biggest fans was his grandmother Jerry N. Hughes, who helped raise him. He had to take a break from his studies to care for her as she suffered from Parkinson's Disease toward the end of her life. The experience of caring for her was a challenge, but he is grateful she was able to see him on television before she passed away.

It was Gilmore's passion for storytelling and communications that led him to UHD. After looking at other Houston-area institutions, he discovered UHD through an Open House event. He said he was sold on the small class sizes and the scope of its Communication Studies Program. Among the faculty who have inspired him the most is lecturer Charles French.

"I've taken two of his classes and I find him to be incredible," Gilmore said. "He gets students engaged and inspires everyone to learn about their classmates. Because of that, I've made great friends in his classes. And, I recommended this class to my girlfriend."

Gilmore's girlfriend, UHD International Business major Farah Zaghmouth, is currently enrolled in a Charles French course and works with him at Reality of Wrestling as an interviewer.

Both will be exercising their communication talents on April 14 during Reality of Wrestling's next event titled, "The Last Stand." Fans can tune in to the Pay-Per-View event on Fite TV or experience the action in person at Texas City's World Gym Arena (10000 Emmet F. Lowry in Texas City).

While he cites his Reality of Wrestling boss Booker T. as a mentor, Gilmore also credits UHD for helping him grow as a professional. Although his courses didn't prepare him to call body slams or Figure Four Leglocks, the lessons learned in UHD classrooms have been invaluable to his career.

"Being a good talker is one thing, but UHD has taught me to be a good communicator," he said. "When you learn from professors like Charles French and others, you learn how to connect a message to your audience. When you're effectively speaking and connecting, you are making an impact with people. That's what I've learned here, and I am very grateful to UHD for helping me develop those skills."