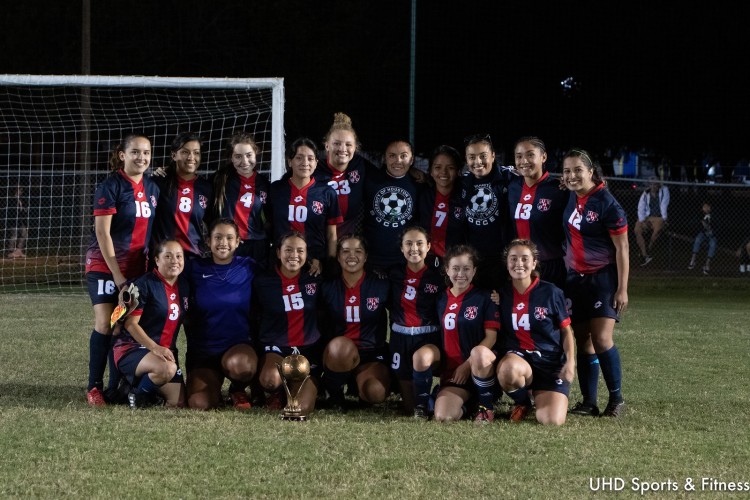 The defending HCSC champions and No.1 seed Lone Star College-North Harris scored quickly in the championship game to go up 1-0 in the 20th minute of the first half. However, UHD responded and tied the game at 1-1 in the 35th minute after a goal by freshman Marily Perez. North Harris regrouped and took a 2-1 lead at halftime. UHD’s Rashel Chavira and Raven Robertson both scored goals in the second half to give UHD a 3-2 lead, and the advantage heading down the stretch with their first conference championship title in sight. With two minutes remaining in the game, North Harris tied the game at 3-3 and forced the championship game to come down to penalty kicks. Under immense pressure, the UHD goalkeeper Tania Maldonado came to the rescue and blocked the first penalty kick to give UHD the early advantage. After exchanging the next four penalty kicks, Maldonado came away with the full extension block to give UHD the 4-2 victory and the club’s first-ever conference title in the Houston Club Sports Conference.

Along with a conference title, the club team also earned a berth to the 2018 NIRSA Super Regional tournament on Nov. 2–4 in Tulsa, Oklahoma. Tournament action kicks off on Friday, Nov. 2 with an opening game at 8 p.m. versus Washington University in St. Louis.

The Gators will play two games at 10 a.m., Saturday, Nov. 3 versus Baylor University, and at 4 p.m. versus Creighton University (Omaha, Nebraska). If UHD advances from pool play, they will have the opportunity to play Sunday, Nov. 4 for a berth to the NIRSA National Soccer Championships on Nov. 29 – Dec. 1 in Foley, Alabama.

All games will be held at the Mohawk Sports Complex in Tulsa.