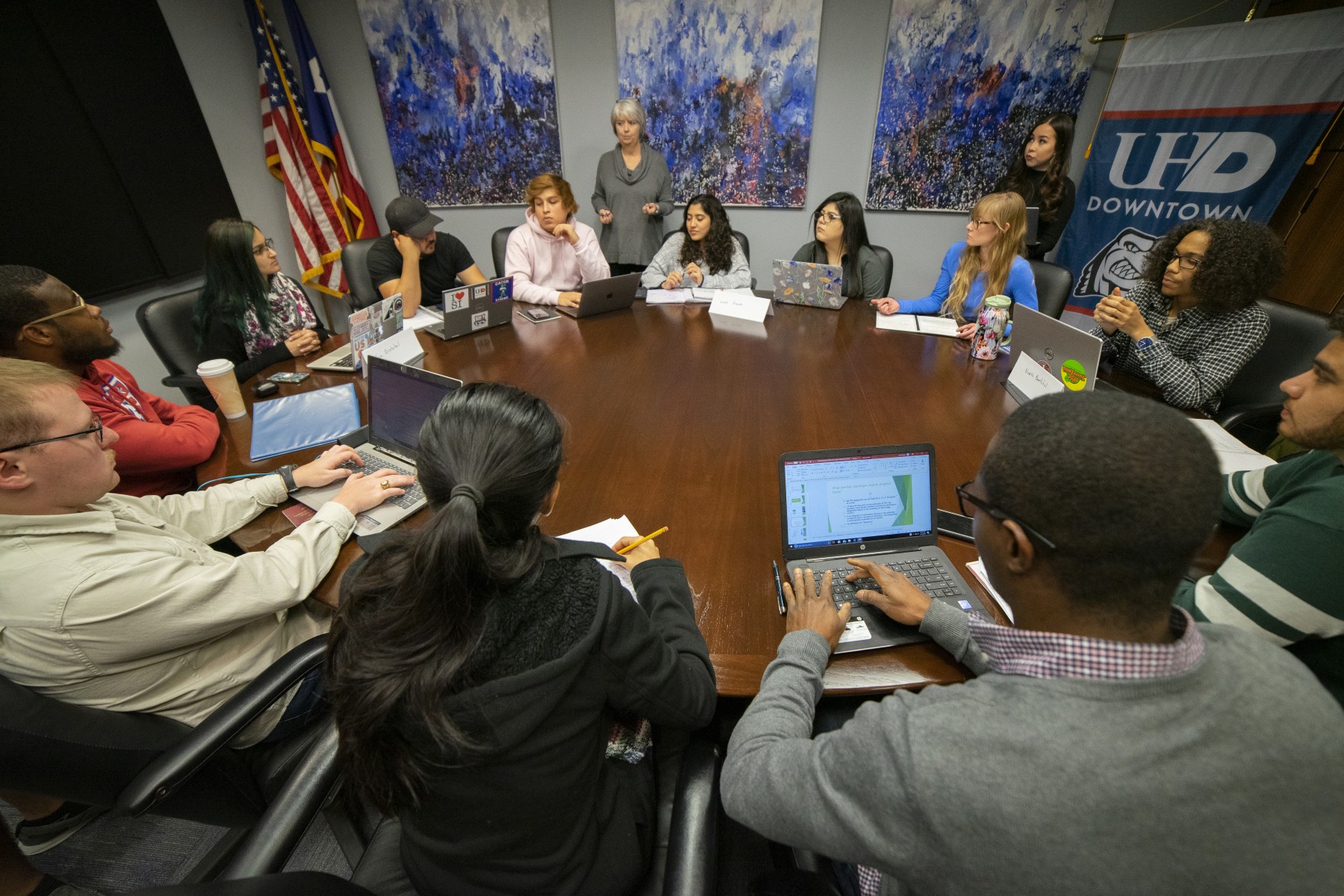 Do you reminder the first time you learned about the Constitution of the United States in a history class or being taught to memorize its first sentence? Here's a gentle reminder:

“We the People of the United States, in Order to form a more perfect Union, establish Justice, insure domestic Tranquility, provide for the common defence, promote the general Welfare, and secure the Blessings of Liberty to ourselves and our Posterity, do ordain and establish this Constitution for the United States of America.”

In Dr. Christina Hughes’ upper-level Political Science 4390 course, students are learning how to create a constitution for the fictitious country Tubdub, (Temporarily Underdeveloped But Definitely Upward Bound). During Hughes’ time as a lecturer, researcher and graduate student at the University of Houston, her favorite class was the simulation course “Principles of Constitutional Design” taught by Dr. Donald S. Lutz. Ironically, it was Lutz who encouraged Hughes to forgo law school, even though she was already accepted, and pursue political science. She eventually joined UHD after an invitation from fellow graduate school colleague Dr. David Branham, professor and chair of Social Sciences at UHD.

“I fell in love with the students here,” said the assistant professor of political science in the College of Humanities & Social Sciences. “I’m also a first-generation college student. I feel like I have more in common with our students and that I can make a difference at UHD.”

In the simplest of terms, the course is described as a simulation and diplomacy course. The class functions as a constitutional convention where students are assigned to Tubdub Islands, which have a multi-ethnic population, varied religious denominations and political party platforms. The students also are provided documents containing the islands’ history, geography and economics as well as early founding documents—everything one would need to know to write a constitution.

“I wanted to learn how the conventions that lead to entirely new forms of government are conducted. What is argued? Why is it argued?” said Jesse Uppal, senior criminal justice and political science major. “The concept of nation building by way of constitutional design is one of the best methods when studying entire demographics of people. I think that knowing how a group of people create documents that will govern hundreds of thousands is key to unlocking relations with foreign countries.” Uppal’s post-UHD plans are to attend law school and pursue a career in politics.

In addition to lectures, the class hosts a constitutional convention where students are given prompts from Hughes, such as “What do you want your political institution to look like?” or “How complex do you want your political institutions to be? (presidential, parliamentary, or unicameral (single legislative chamber, i.e. England) or bicameral (two legislative chambers, i.e. House of Representatives and Senate).” Within this unmoderated caucus, ideas are brought forth and debates ensue about parliamentary procedures.

“Per Lutz, the more factions you have in your country, the more diversity you have … the more complex your political institutions need to be. You need to protect all your political minorities from the political majority, which ensures all that complexity protects everyone,” said Hughes. “The U.S. Constitution is used as a baseline in the course since it’s the oldest living democracy.”

Along with Lutz’s book, students also are assigned portions of The Federalist Papers (a collection of 85 articles and essays written by Alexander Hamilton, James Madison and John Jay under the pseudonym “Publius” to promote the ratification of the United States Constitution) as well as comparative literature in politics and theory (Aristotle, Hobbes, Shaw, Locke and Rousseau) and American government.

“Countries can become chaotic when governments enter a crisis. By understanding the framework of how agovernment should work can help avoid those crises,”said Grant McFarland, senior political science major. “Learning and comparing how models of government are designed and the complexity of the crises they face has made this course intriguing and captivating.”

The class’ final project is to write their own constitutions and federalist papers defending why their constitution is best for this fictional country.

“It’s really a cool class,” Hughes emphasized. “In political science courses, we teach them about American government and other political institutions that exist. This class takes every political science concept they’ve learned and puts it into practice, seeing how it works and what it all means. And, along the way they’re learning parliamentary procedures. “I love UHD … it’s allowed me to create and offer new classes that encourage and teach my students to make the world a better place.”