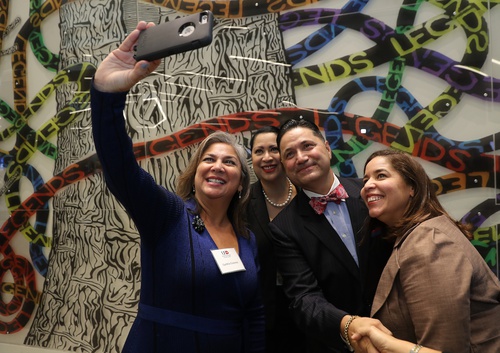 Festivities for Invest In Blue events continued on Oct. 24 with the signage unveiling for the newly named Marilyn Davies College of Business followed by the Vision & Welcome Event hosted by UHD President, Dr. Juan Sánchez Muñoz.

After the unveiling, guests were invited to the Welcome Center for the Vision & Welcome Event where Muñoz addressed community leaders, donors and friends of the University about the institution's future growth and stature in the city, state and nation and how they can play a part in the capital campaign, UHD, Here We Go.

University of Houston System Regent and alumna Paula Mendoza opened the event to introduce Muñoz and the ambitions of UHD.

"I am convinced that he is right leader at the right time for UHD," said Mendoza, who is also chair of the System's Academic and Student Success Committee. "His personal commitment and passion for UHD students, belief that they will succeed, and dogged determination to insure that they have the tools to succeed are key to the University's future.

"UHD is committed to doing its part to teach, mentor, advise, counsel. But, as a community we have a role to play. All of us here today achieved success with the support and guidance of others," she added. "Dr. Munoz will challenge you today to do your part, as others have done for us, to encourage, support and sustain these students. Their success is Houston's success, and we are all stronger together."

Following Mendoza's introduction, Houston Mayor Sylvester Turner delivered remarks and stated his admiration for UHD. He said that the University is a cornerstone of the community and that he was proud to be in attendance for this special event.

Muñoz thanked Davies and her family for the gift that further poises the College for even greater success because of her investment and vision for UHD.

"Now, the city and every individual who drives thru Downtown on I-10 will be aware of Marilyn's investment in our University and students," said Muñoz. "Marilyn's confidence in our institution and our students will play an essential role in a bold new capital campaign that we are unveiling today - "UHD, Here, We Go."

Davies took some time to offer her support for UHD. Although she did not attend the University, her son and brother are alumni. She recognized the difference UHD made in their lives and wanted to pay it forward for future students. She offered words of encouragement to those who may consider following in her philanthropic footsteps.

"First, you learn, then you earn … then you return," Davies said.

The event represented the official public announcement of the UHD capital campaign, which will focus on student success, faculty development, campus growth and community engagement. Muñoz stressed the importance of this campaign to continue UHD's transformation to a nationally recognized leader in urban higher education.

Muñoz invited guests to lend their support to the campaign, which will prepare students for success as professionals and community leaders who are making a difference in our city, state, and country.

"Ultimately, this campaign is about our students," he said. "I know there are others in our community, like Marilyn, who know someone that has benefitted from our institution … or know how our University is contributing to the city of Houston … or who have earned a quality education from UHD, or who simply want to help hard-working Houstonians from modest backgrounds, but with Texas-sized ambitions, succeed."