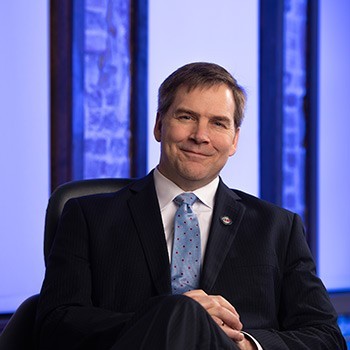 Since his arrival at the University of Houston-Downtown, Dr. Eric Carl Link has played a central role in the University’s efforts to grow both its enrollment and its academic offerings. Now, Link, UHD’s Senior Vice President for Academic & Student Affairs and Provost, is preparing for a new professional endeavor.

On Feb. 12, Link was officially named Provost for the University of North Dakota. He will remain with UHD throughout the spring semester, then transition into his new role in North Dakota during the summer months.

Provost Link joined UHD in January of 2019, and since then, he’s led the University’s efforts to achieve substantial increases in student enrollment and new programming across academic affairs. Additionally, his leadership successfully guided Gators during 2020 as the campus community navigated the challenges presented by the pandemic. Online initiatives such as the Virtual Lobby and the Keep on Teaching & Learning website were launched by the Office of the Provost and have supported Gators working and learning from home during COVID-19.

“Serving as Provost and Senior Vice President for Academic and Student Affairs here at UHD has truly been a great honor,” Link said. “UHD is a wonderful institution with fantastic students, staff, and faculty. I’m proud to work alongside so many fine colleagues.”

Following President Loren Blanchard’s tenure beginning in March, UHD soon will begin a national search to identify its next Senior Vice President of Academic & Student Affairs and Provost. Updates on the search process, including the selection of a search committee, are forthcoming.

According to Link, he and his family have valued their time in Houston and he is particularly proud of his tenure as UHD Provost.

“The University of Houston Downtown has a distinctive campus, with a stunning and historical location; but the true value of a university is not found in its buildings, but in its people, and by that measure UHD is a great American institution serving a diverse city and student body. It has been a pleasure to be a part of the UHD community and to help move our University toward an even greater future. I will forever be grateful for the time I had here in Houston.”