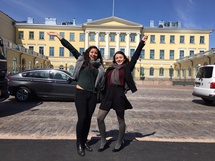 Students in the University of Houston-Downtown (UHD) University Honors Program traveled to Helsinki, Finland and Stockholm, Sweden as part of an Honors section of World History II (HIST 2316).

While the course covered world history broadly, it also included a special focus on Swedish expansion from the sixteenth through eighteenth centuries and the relationship between the formation of the modern state and public education in twentieth-century Finland. The May 2016 trip was the first study abroad sponsored by the University Honors Program. Mari Nicholson-Preuss, Ph.D., director of the University Honors Program, and Gene B. Preuss, Ph.D., associate professor of History, led the tour. UHD alumnus, Annabella Gutierrez, who is currently a graduate student in the history program at Stephen F. Austin University, also travelled with the large group.

The itinerary provided students an opportunity to see firsthand places associated with the content of the course's special focus areas and gain a better understanding for the context of their studies.

"Our study abroad trip allowed me to discover a whole new part of the world with my friends, "said Chisomnazu "Stephaine" Ibe, a UHD biology major. We were always learning something new and everyone was very welcoming and helpful. It was exciting to recognize something we'd discussed in class."

The Helsinki portion of the trip focused on the twentieth century development and transformation of the Finnish education system. Students visited Finland's National Board of Education and attended a lecture on Finnish education by Counsellor of Education, Leo Pahkin. The lecture at the Board of Education prepared the students for their visit to Lauttasaari Comprehensive and Upper Secondary School. Students spoke with faculty and students, visited classrooms and had lunch with the students.

UHD student Citlaly Rubio said, "I enjoyed getting to visit with the students during our visit to the Finnish school. We were invited into one of the English classes and the teacher asked us to speak with the students in small groups to help them practice their English. I was surprised to see that the teacher had her dog in the classroom. Apparently, he helps put nervous students at ease. Everyone was very welcoming and friendly."

The Swedish portion of the trip focused on the historical locations associated with the students' readings on the rise of modern Sweden and the Vasa Dynasty. The extensive sightseeing tour included stops at several well-known museums, including the Vasa Maritime Museum, which houses a fully restored seventeenth century warship recovered from Stockholm Harbor.

In Gamla Stan, Stockholm's old town, students saw many of the places discussed in their class, such as the square where the Stockholm Bloodbath took place in the early 1500s. On the students' last day in Sweden they visited Valla Torp School in the suburb of Täby where they learned about the similarities and differences between the Swedish and Finnish school systems. Britt-Marie Brottman-Adamsson, the school's headmaster, provided a brief lecture on Swedish education before inviting the group to join her for "fika" (midmorning coffee and snacks).

During their visit, the group spoke to teachers and students about their experiences and toured the campus. Upon returning to Stockholm, the group went their separate ways and spent the rest of the afternoon on their own to exploring more of the city, shopping, and visiting additional museums.

Reflecting on the great trip, Nicholson-Preuss said, "It was an outstanding experience and the students really made the most of every opportunity to engage with the local culture and try new things. I was pleased to find out how many of our students said that they would feel confident returning to Helsinki or Stockholm on their own and I consider that sentiment to be one of the hallmarks of a successful trip."

More than 60 percent of the students in the Honors Program traveled overseas during May, in addition to those that visited Finland and Sweden, Honors students also participated in UHD faculty-led trips to Greece and Costa Rica. A majority of the travelers benefitted from study abroad scholarships funded through the UHD Office of International Education and Study Abroad. The University Honors Program is committed to providing its students with opportunities for undergraduate travel.