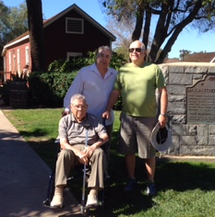 The University community would like to share our condolences with President Flores and his family upon the death of his father, William J. Flores. Mr. Flores passed away Tuesday evening in his home state of California, at the age of 94.

Please keep Dr. Flores and his family in your thoughts during this difficult time.

Please find below a brief narrative of Mr. Flores' life.

William J. Flores was born on February 10, 1921 in Old Town San Diego, the first established town in southern California. He attended the first public school in San Diego, which was a segregated school for Mexican children at a time when speaking Spanish was punished in school.

During World War II, he dropped out of school and joined the army at 17 years of age. He fought in World War II in the U.S. Army Air Corps and was stationed in the Philippines as an aircraft mechanic. After the war, he married Velia Aldrete on April 19, 1947 and began working for the Navy as an assembler. When Dr. Flores was in the third grade, his father started night school to complete high school and to study drafting. He graduated from high school a few years later and got a job for the U.S. Department of Defense Bureau of Naval Weapons. Promoted several times, at the time of his retirement Mr. Flores was responsible for all helicopters in the 7th Fleet. Mr. Flores had privileges as an officer at the Commander rank and was injured in Viet Nam at Da Nang during the Tet Offensive.

Dr. Flores notes that, despite his work schedule, his father found time to coach his Little League team and - by his example of going back to school to earn a degree- taught his son the importance of education. When Dr. Flores was in the sixth grade he would join his father in watching high school classes on TV through the local community channel, while his father worked on his homework, eventually earning his diploma. His father's perseverance in earning an education revealed his dedication to his family and his efforts to improve the lives of his three sons, Dr. William Flores, Glenn and Gary. Dr. Flores' mother, Velia, passed away in 2005, one day after her 58th wedding anniversary.

William J. Flores was cherished by his family and will be greatly missed. A memorial service will be held in April. The family is establishing a scholarship fund to honor his memory. In lieu of flowers, contributions can be made to a memorial fund in Mr. Flores' name at the University of Houston-Downtown.