UHD's Webb Historical Society recently traveled to Victoria, Texas for the organization's fall convention. It was an opportunity for UHD's "Webbers" to learn about Texas history, meet with students from other chapters in east and central Texas, and have some fun at the same time.

The event was hosted by UHD's sister institution, UH-Victoria, and began with a guided tour of the Museum of the Coastal Bend. The students, accompanied by faculty advisors Garna Christian, Jose Álvarez and Gene Preuss, had the opportunity to see rare Paleolithic artifacts as well as items dating back to the Spanish and French colonization of Texas. Of particular interest were some iron cannons which had been buried for hundreds of years and items unearthed from La Salle's Fort Saint Louis. Outside the museum, the students tried their hand at throwing the atlatl for accuracy and distance, and roping training steers.

In the evening, on the campus of UHV, faculty sponsors and students enjoyed dinner and a fascinating lecture and slide show courtesy of historian/archeologist Jim Bruseth from the Bullock Texas State History Museum in Austin. Bruseth spoke about the search for Robert de La Salle's ship La Belle which sank in Matagorda Bay in 1686. He described the way the ship was recovered, the artifacts it contained, and the intriguing history of what happened to La Salle and his crew, those who survived and those who perished.

On Saturday morning, the students and sponsors were given a guided tour of Evergreen Cemetery which is the final resting place of Texas "Empresario" and hero Don Martín de León, as well as other Texas notables from the 19th century. From the cemetery, it was off to downtown Victoria to enjoy the Dia de los Muertos festivities with a parade, a visit to the Nave Museum, and browsing the booths of local artisans and merchants. After lunch, the students received a guided tour of historic Victoria by Blanche De León, a descendant of Don Martín de León.

The students enjoyed learning about the early history of Victoria, French explorer La Salle and the La Belle, as well as making new friends with students from other colleges and universities. It was a trip of "hands-on history." 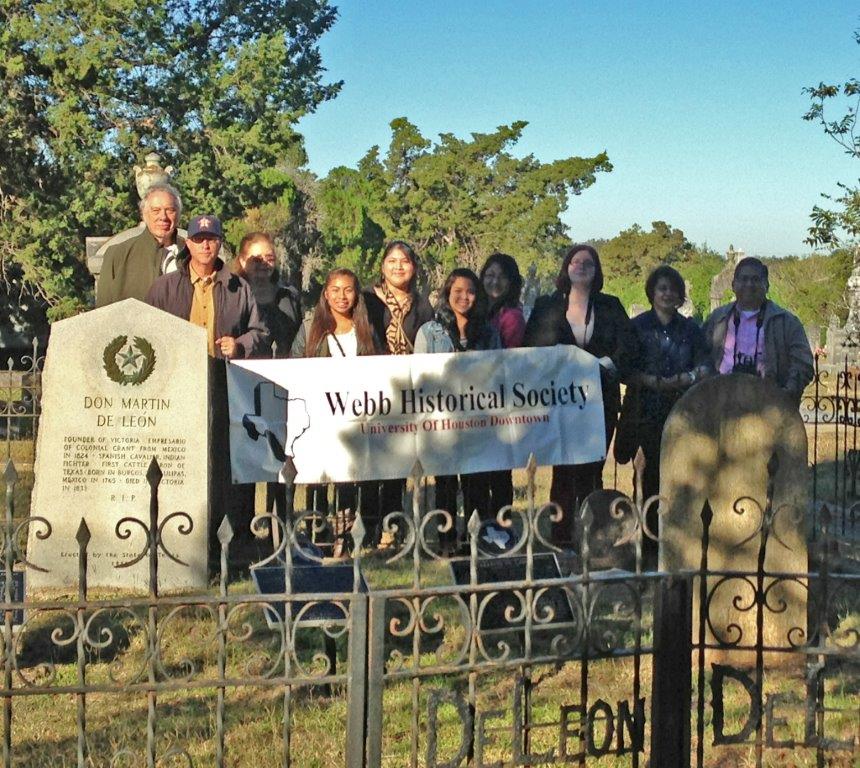