The bayou running beneath University of Houston-Downtown is the newest location of one of the most Instagram- and selfie-worthy spots in all of downtown. The 223-foot-long mural “Confluence,” located on the Bayou Greenway trail just underneath UHD’s historic One Main Building, is the latest addition to public artwork surrounding the University, further solidifying the institution’s reputation as a creative epicenter for the city of Houston.

“UHD prides itself on connecting in different ways to the communities it serves from education to public service to art. The completion of ‘Confluence,’ just steps away from our campus, as well as the several public art installations owned by the University, demonstrate the symbiotic relationship between the University of Houston-Downtown and the namesake city it serves. We are proud to create space for artistic enrichment, support projects that reflect the diversity of our campus, and create a thought-provoking dialogue for all who witness these works,” said Elisa Olsen, UHD’s Executive Director of the Office of University Relations.

Several works on campus exemplify the spirit of creativity abounding at UHD. 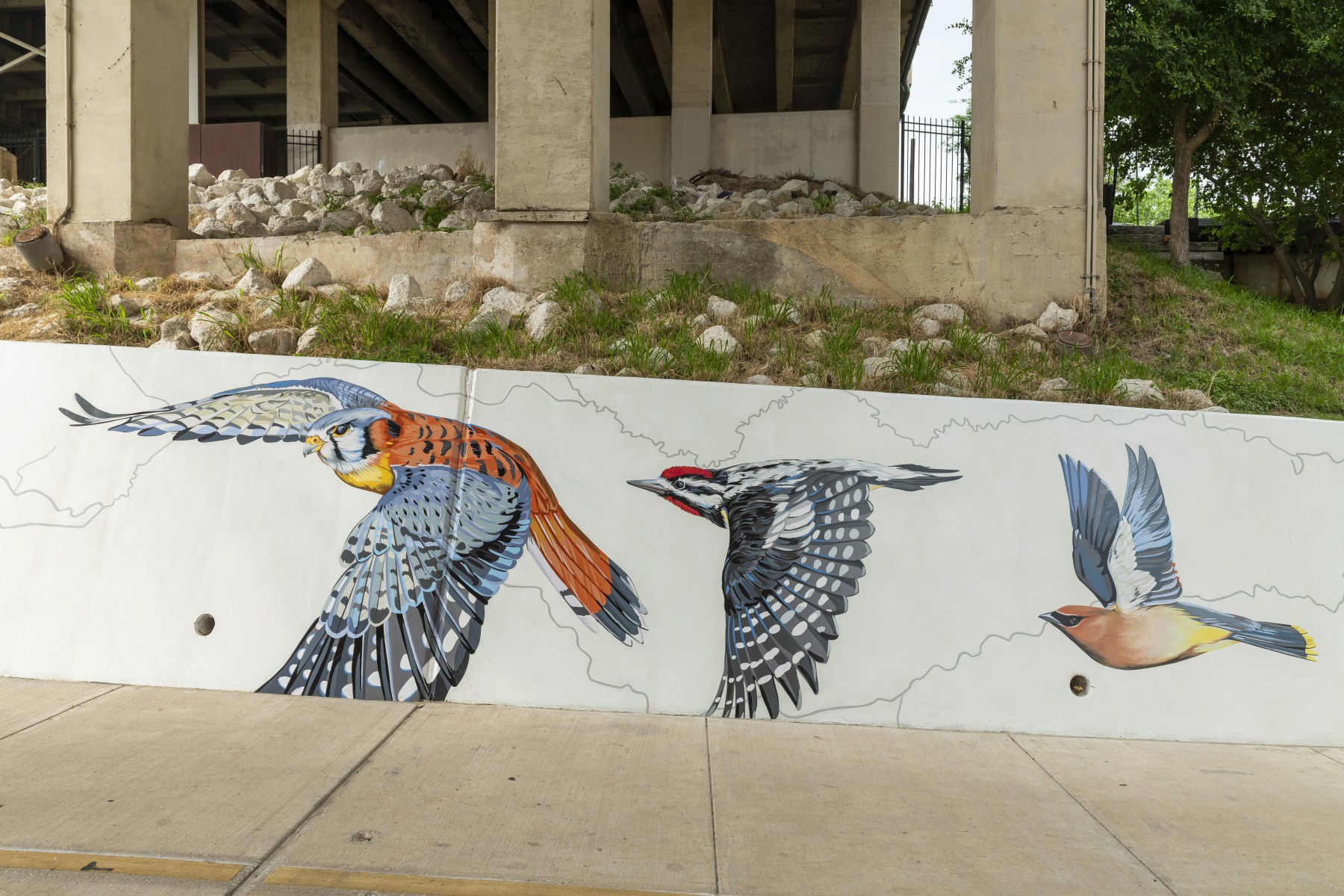 Commissioned by Houston Parks Board and Buffalo Bayou Partnership, this newly minted public art installation stands along the Bayou Greenway trail at the confluence of White Oak and Buffalo Bayous, located adjacent to the UHD campus. Created by artist Jane Kim, co-founder of Ink Dwell studio, the mural showcases the birds that call Houston’s bayous home. Ink Dwell studio’s depiction of Houston’s native birds provides a contrast to the urban character of this downtown site.

“Confluence” tells a 12-month story of Houston’s migratory birds. Its name refers to the way in which many birds change color seasonally to attract mates. At the center are six species represented in both their spring breeding plumage and their non-breeding plumage. On the right are three species that winter in Houston; on the left are three species that arrive in the spring to breed. A map of Houston’s bayous serves as the backdrop to bring movement and energy to the work.

The mural enriches the experience of cyclists, pedestrians, students, and commuters who use the trail daily. Central to both the bayou system and downtown Houston, “Confluence” will also be visible to nearby office buildings as well as the campus. As with Houston Parks Board’s Bayou Greenways 2020 initiative, “Confluence” is a product of the public/private partnership between City of Houston and Harris County, along with voters and philanthropists with a particular thanks to Tom and Laura Bacon. The mural project also engaged with Houston Audubon to provide ornithological expertise and programmatic direction. Houston Parks Board served as project manager on the installation and is responsible for ongoing maintenance of this portion of the Bayou Greenways system.

(Photo by Anthony Rathbun, Courtesy of Houston Parks Board)

In reference to UHD’s Gator mascot, a wall near UHD’s Willow Street Pump Station features a mural of the city’s most famous reptile. Created by artist and muralist Sebastien “MrD1987” Boileau and his Houston-based mural company Eyeful Art, the piece provides another pride-inspiring display on campus. The imagery personifies the grit and spirit of the UHD Community.

Faculty, staff, students and alumni will recall that Boileau was the creative talent behind the original Gator Wall located on a storage building in the University’s Daly Street Lot. While that popular mural was conceived as a temporary addition to campus (and recently removed to make way for the College of Sciences & Technology Building), the new Gator Wall is now a permanent installation.

It is located behind the Willow Street Pump Station along Buffalo Bayou on historic Allen’s Landing, and it is visible from windows on the east side of the One Main Building and from the Main Street Bridge. 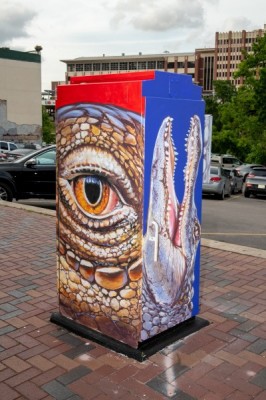 Houstonians are well-versed with the colorful murals adorning the city’s utility boxes, and for UHD, these miniature creations hold a significant point of pride. UP Art Studio, co-founded by UHD alumna Elia Quiles, initiated the award-winning Mini Murals Houston project that reimagines traffic signal control cabinets (also referred to as electrical or utility boxes) and converts them into works of art by local and visiting artists.

At the intersection of North Main and Commerce stands a mini-Gator mural representing the four-legged symbol of UHD. The work, commissioned in collaboration with UHD’s Office of University Relations and UP Art Studio, was created by local artist Anat Ronen who is responsible for numerous murals across the city.

Greater Houston residents can visit minimurals.org/houston to discover locations in their neighborhoods that may feature a mini mural. These mini murals are intended to help instill civic pride while beautifying neighborhoods and enhancing the urban landscape. 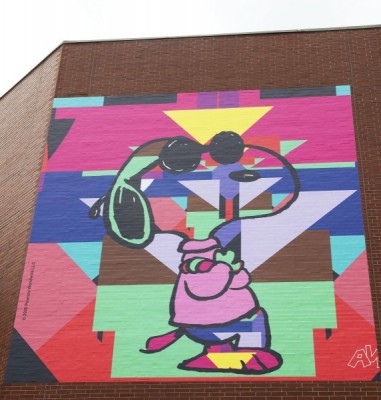 Peanuts and art fans have been experiencing Snoopy-inspired surprises in Houston’s expanding public parks, Downtown business community, along the city’s bayou greenways and on its history-making NASA campus at Space Center Houston.

The Houston Arts Alliance (HAA), along with Houston Parks Board, chose UHD as one of the city’s destinations for an art installation by the Peanuts Global Artist Collective. Located on the East side of the Jesse H. Jones Student Life Center, the artwork is the creation of Assume Vivid Astro Focus (AVAF)—founded by Brazilian-born artist Eli Sudbrack.

The UHD Community, Houston residents and visitors are encouraged to participate in the project by taking pictures in front of the murals and post to their social media accounts using the hashtags #SnoopyGlobalArt and #PeanutsHTX. 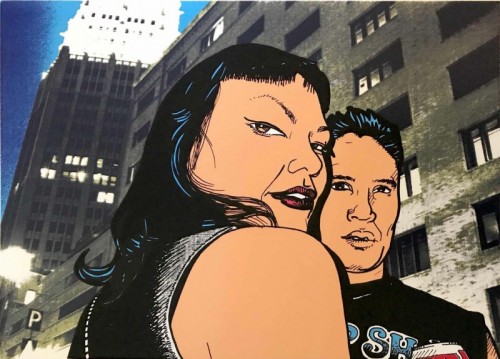 UHD’s O’Kane Gallery houses hosts many opportunities for the public to consume, engage with and explore artists and their works. “Close to Home: Latinx Art and Identity” – originally intended for a two-month run at the gallery – was gifted by Drs. Harriett and Ricardo Romo as a permanent installation for the University, helping to further substantiate it as a destination for creative works. The collection is comprised of prints and paintings by several generations of U.S. Latinos that combines iconic images and up-to-the-minute works by important newcomers. The collection will soon be installed on campus for permanent public viewing.

Public Art of the University of Houston System 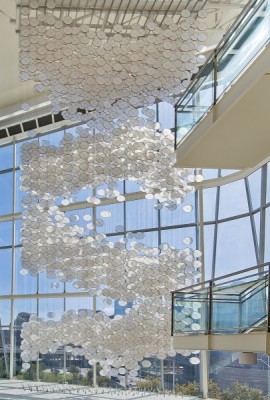 In addition to the pieces owned by UHD or located close to campus, Public Art of the University of Houston System (Public Art UHS) houses many items in its collection at the University. Notable pieces include Trenton Doyle Hancock’s “LEGENDS,” Jacob Hashimoto’s “Cloud Deck,” Bert Samples’ “Manu Languidly Stirs Songs in the Grip of Shadow and Light,” and John Scott’s “Prayer Meeting.” More than fifty years after its establishment, Public Art UHS’ programs and collection now span the four component universities of the UH System with nearly 700 artworks.