Artists to Participate in Aug. 25 "On Site x Off Site" Event 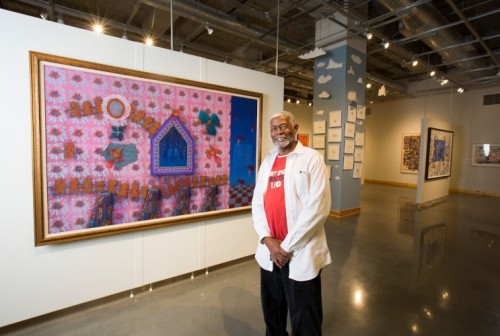 Artists Floyd Newsum and Bert Samples have certainly left their mark on Houston (among many other cities), as well as the University of Houston-Downtown (UHD).

Soon, they will share insights on their work and creative processes … and their lives as artists during the pandemic with arts patrons.

Newsum and Samples are the featured artists during the upcoming edition of “On Site x Off Site,” a conversation series presented by Public Art University of Houston System. The discussion begins at 5 p.m., Aug. 25 on Zoom with moderator Dr. Maria C. Gaztambide, Director & Chief Curator of Public Art University of Houston System. Attendees are encouraged to register for this event in advance.

Newsum, Professor of Art, is one of UHD’s longest serving faculty members and has taught aspiring artists in University studios since 1976. He also continues to inspire Houstonians and  and people around the world with works presented in public spaces, private galleries and renowned museums. Just down the street from UHD on the Main Street rail line, his installation “Planter and Stems” enlivens downtown with its colorful imagery. Another installation “Ladder of Hope” presents images of nature and community within our city’s Acres Homes Multi-Service Center.

A co-founder of Houston’s Project Row Houses, Newsum also was among the esteemed artists with work presented at the opening of the Smithsonian Institution's National Museum of African American History and Culture (NMAAHC) in Washington, D.C. in 2016. His painting “After the Storm, CNN” was featured in the Museum during that historic opening.

UHD Community members are no doubt familiar with his glass installation "Manu Languidly Stirs Songs in the Grip of Shadow and Light," which forms an otherworldly wall between the W.I. Dykes Library’s Event Room and the Reading Room on the northwest part of the fourth floor. This piece is included in the collection that comprises Public Art University of Houston System.

"It's a pleasure to talk about art with my dear friend Bert Samples," Newsum said. "The conversation will be insightful and informing. During this time in the world with a horrible virus destroying lives, we need a light conversation that will lift up the spirit of the community."

The upcoming edition of “On Site x Off Site” is the latest conversation to feature artists or artwork based at UHD. Last month, art professor and Director of UHD’s O’Kane Gallery Mark Cervenka hosted a conversation with artists Vincent Valdez (who created the painting “One in a Million” that is featured on the fourth floor of UHD’s One Main Building) and Adriana Corral. In June, Jacob Hashimoto, creator of “Cloud Deck,” the installation greeting people entering the Shea Street Building, was featured in this series.