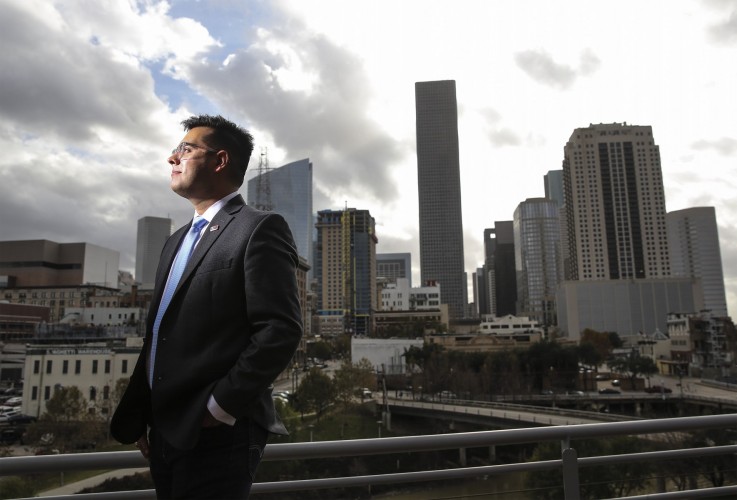 Daniel Peña’s debut novel, “Bang,” continues to be the shot heard throughout the literary world.

Peña, University of Houston-Downtown assistant professor of creative writing, has earned rave reviews for his story of undocumented brothers who are stranded in their home country of Mexico that is far different than the one they left.

Now, “Bang” has received honors from the National Association for Chicana and Chicano Studies (NACCS) Texas chapter. The book earned the Tejas Foco Fiction Award during a recent conference in Houston. The award recognizes works that address topics related to the Mexican American experience in Texas.

“I’m deeply humbled by this incredible honor,” Peña said. “It’s a huge nod of approval from my own community, which means the world to me. It pleases me that this book written from the two fabrics that created me—Texas and Mexico—has found a home with readers from those fabrics who find this story resonating with them too. I hope my work always finds a home with those readers first.”

“Bang” was published in 2018 by Arte Público Press. It tells the story of undocumented Mexican brothers Uli and Cuathemoc. After taking a small plane for a leisurely flight, they crash in Mexico and are separated. They soon discover that the Mexico they departed as children is a much different place. As they embark on an odyssey to return to their family in San Miguel, they encounter drug cartels and other challenges.

“Daniel Peña wrote a wonderful novel that is not about showing us yet again the drug-dealing world. It’s a book that carves deep into our pain, that talks about the burden of our origins,” wrote fellow author Efrén Ordóñez in his review of the book that appeared in “The Quarterly Conversation.”

Upon its publication, Peña shared the book with international audiences at the University of Leipzig in Germany where he served as Picador Guest Professor for Literature in 2017. He also has delivered readings and led discussions at the Texas Book Festival, the Jaipur Literature Festival and other literary events.

In addition to earning the Tejas Foco Fiction Award, “Bang” has been named a finalist for In the Margins’ 2019 Advocacy/Social Justice Award, spotlighting texts appealing to at-risk youths living in poverty, on the streets or in custody.

Prior to the publication of “Bang,” Peña earned the Pushcart Prize in Fiction for the story “Safe Home.”