UHD’s Daniel Peña Contributes to Anthology “There’s a Revolution Outside, My Love” 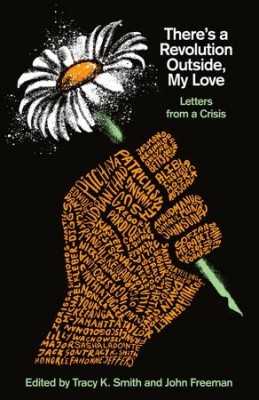 'There's a Revolution Outside, My Love'

“Tumultuous” can best describe 2020 and 2021 for many Americans. A pandemic, racial violence and a politically charged insurrection are just some of the factors that heightened anxieties throughout the nation.

The shared experiences of surviving through troubled times has connected people from all walks of life, and it has only been within the past few months that many have been able to catch their breaths.

The new book “There’s a Revolution Outside, My Love,” spotlights the visceral responses to the events of 2020 and 2021 (in particular the tragedy surrounding the late George Floyd) through essays and poems from a collection of writers, including the University of Houston-Downtown's Daniel Peña.

Peña, UHD Assistant Professor of English, contributed the essay “Letter from Houston: Let These Protests Shine a Light on America.” He was among the thousands of Houstonians (and UHD Community members) who took to the streets of Downtown Houston to protest violence against people of color following the death of Floyd at the hands of Minneapolis police officers.

“There was the expectation of violence from some of those who opposed the march, but it was really a peaceful demonstration,” he said. “The essay explores how this march was greater than grace. It takes an incredible amount of humanity for a community to march peacefully in the face of the indignities suffered by George Floyd and so many others.”

Peña will participate in a discussion on the book and reading of his essay this week during a virtual event presented by Brazos Bookstore at 7 p.m., March 12. Joining him for this event is Kirsten West Savali, whose letter to her son inspired the title “There’s a Revolution Outside, My Love.” The conversation will be moderated by Houston poet laureate emeritus Deborah D.E.E.P Mouton.

The timing of this anthology could not be more perfect, Peña said. And he added he could not be in better company as the book contains works by a who’s who of leading literary voices. Other authors and poets contributing to “There’s a Revolution Outside, My Love,” include Francisco Goldman, Patricia Smith, Victor Tovar, Julia Alvarez, Edwidge Danticat, Layli Long Soldier, Monica Youn, Julia Alvarez, Reginald Dwayne Betts, Keeanga-Yamahtta Taylor and others. The book was edited by John Freeman and Tracy K. Smith

“I am honored to have my essay included with pieces written by some of the leading writers in our nation … all of whom are ruminating on the questions ‘Who are we as Americans?’ and “Where do we go from here?’” he said. “This volume doesn’t just contain the zenith of voices in contemporary literature, but also the zenith of what humanity has to offer the world we find ourselves in right now.”

To learn more about “There’s a Revolution Outside, My Love” and to hear an excerpt from the book, visit the Penguin Random House website.

UHD’s Daniel Peña Contributes to Anthology “There’s a Revolution Outside, My Love”