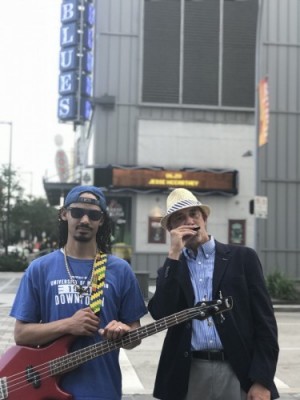 It’s long been known that “blue” is the dominant school color for the University of Houston-Downtown, but one of the institution’s best kept secrets is rooted in blues music.

UHD’s very own blues band Admission Possible—featuring staff members Spencer Lightsy and Chris “Blu Hat” Bell—were among the artists affected by the closing of venues and nightclubs during 2020. Now, however, they are back in action and will take the stage at 4 p.m., June 20 at King’s Court located at 903 Hutchins Street (owned by alumnus Jatin Patel) as part of the H-Town Artist Showcase. The event benefits the Dollie Rose Foundation, which supports Houstonians in need through a range of initiatives.

Bassist Lightsy, Associate Director of Undergraduate Admissions, said to expect a mix of classic blues and R&B mixed in with some newer selections and originals.

While he and vocalist Bell, Coordinator of Graduate Admissions, are looking forward to hitting the stage again, they also are enthusiastic about representing UHD in the community.

“Playing live in front of an audience is always a good time, but when we are able to perform while representing UHD, there is an additional level of excitement,” Lightsy said. “Representing UHD lets the community know that we are engaged in our city beyond the classroom.”

Admission Possible began to take shape on campus in 2017 with Lightsy and Bell performing at campus functions and eventually becoming mainstays at the House of Blues during Open Mic Night. They have additionally performed outside of Minute Maid Park during the World Series and appeared on live television during FOX26’s “The Isiah Factor.”

While Lightsy and Bell are the two core members of the group, faculty and staff have joined them for live performances. Among the rotating musicians who have jammed with Admission Possible are Paul Fortunato, Associate Professor of English (guitar) and Dan Ko, Video Production Specialist (guitar).

As far as current and future Gators joining Admission Possible for performances, Lightsy said the door is certainly open.

“Before the pandemic I had brainstormed on having UHD be a venue for some music showcases,” he said. “I would like to do something with current students, faculty and staff, and with prospective students as well. Getting others from the UHD community to sit in with Admission Possible could be an organic team building avenue. Expanding from that core group, to allow prospective students to participate in an on-campus showcase, could be a great way for high school students to envision themselves being part of UHD in the future as an enrolled college student.”