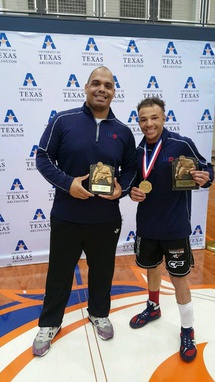 The UHD wrestling club team competed in their second Southwest Conference Tournament in the National Collegiate Wrestling Association this past weekend. The tournament was held at the Mavericks Activities Center on campus at the University of Texas at Arlington. As a team, UHD finished in third place out of seven teams in the tournament, missing second place by just two points.

Special congratulations to head coach of the UHD wrestling club team LeRoy Gardner, with the help of assistant coach Tim Sykes, on earning NCWA Southwest Conference Coach of the Year. The club is in their second season of competing in the NCWA, and are able to send four students to compete at NCWA Nationals. Another award was handed out to UHD's Devon Jackson for Most Outstanding Wrestler at the conference tournament.