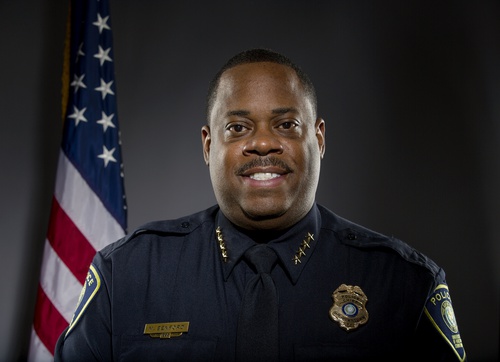 A change in leadership is happening in University of Houston-Downtown Police Department (UHDPD) as a new chief has taken the reins and is ready to keep the campus safe and secure.

On Dec, 16, members of the UHD and Houston communities assembled in the Milam/Travis Room of the Welcome Center to welcome law enforcement veteran Michael Benford as the institution's new chief of police. Benford was officially sworn in as UHD's chief, replacing the recently retired Richard Boyle.

In an emotional speech, Benford said he was grateful for the opportunity to lead the UHDPD. He thanked his family, including wife Gina, and those who have supported him throughout his career. He also commended the University on being the third safest university in the country and pledged to uphold UHDPD's high standards of moral character, integrity and protection.

Benford raised his right hand, and in a confident tone, pronounced the oath of office. As a crowd of well-wishers supporters watched from the audience, Benford's daughter Taylor pinned on the chief's badge on his chest while his wife, looked on.

Among those present for the ceremony were UHD Interim President Michael A. Olivas, Vice President for Administration and Finance David Bradley; Pastor Johnny Prados, UHDPD officers, and extended family members.

Olivas thanked those involved in the search process for making the obvious choice as a successor to 16-year UHDPD veteran Boyle who retired in May. Olivas said he is very proud of Benford's "accomplishments and leadership, and is confident in the value of service he will bring to this institution."

Benford served as assistant chief for the Houston Independent School District (HISD) Police Department and held a number of leadership roles for the district before joining UHD.

"All I ask of you, each day, is that you come to work, do your best, and you always put the citizens first," Benford said.