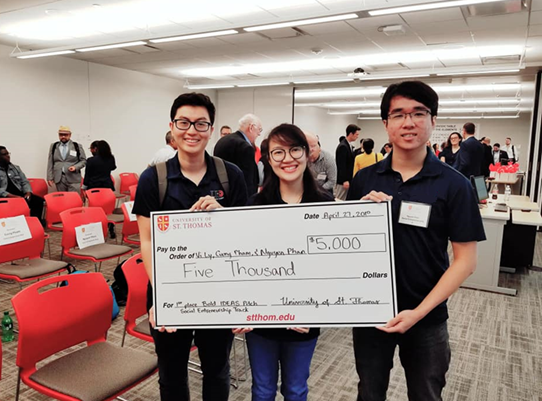 A UHD team won first place and $5,000 at the BOLD Idea Pitch Competition held at University of St. Thomas on April 27 for their Malaria Scanner project.

They had three minutes to present their idea to a panel in the Shark Tank style competition. Judges identified the UHD team as having "the best idea" in the Social Entrepreneurship category.

Ly explained how they came up with the idea at HackHouston 2019, a hackathon where each group has 24 hours to develop a working program.

“When I found the Malaria blood cell dataset, I had a sense that the team could make a meaningful project out of it,” Ly said. “We brainstormed and developed our full project and website around the Malaria cell dataset. After several long hours of trials and failures, we were finally able to deliver a functional web demo to the judge at HackHouston and won third place.”

Pham says that it was hard work at first developing the code.

“It was challenging for me to develop the first version of our Malaria Scanner project at the beginning,” Pham explained. “Understanding the project idea is simple, but to put that idea into code and turn it into a working program is another challenge. I didn’t have much experience with TensorFlow at that time. However, I managed to build the first working version of our project by researching and learning online tutorials.”

Ly describes how afterwards the team was able to redesign and polish that program to look more professional to present at the BOLD Idea Competition.

According to Ly, the judges were impressed with their motivation to help third world countries and the fact they had a completed product and non-profit business model and awarded them first place.

Ly said the team was overjoyed and described the team’s plans to continue their work.

“The money will definitely be put in more research and development since we have many future plans for the Malaria Scanner project," Ly said.

The BOLD Idea Pitch Competition is hosted each year by The Cameron School of Business and sponsored by The McNair Foundation, the Social Entrepreneurship Program at UST and Station Houston.