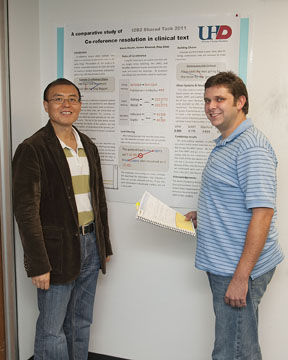 A University of Houston-Downtown student team tied for first place in an international computer science competition and their project is another piece in a complex computing puzzle that eventually could enable doctors to more quickly diagnosis and treat their patients with the help of information-evaluating machines.

David Hinote and Carlos Ramirez with faculty advisor Dr. Ping Chen, Associate Professor of Computer Science and director of UHD's Artificial Intelligence Laboratory, finished in a four-way tie with teams from Microsoft Research Asia (China), Open University of the United Kingdom and the University of Texas-Dallas.

Dubbed i2b2, Informatics for Integrating Biology and the Bedside, the competition is funded by the National Institutes of Health and is part of a National Center for Biomedical Computing. Health care informatics broadly deals with the resources, devices, and methods required for optimizing the acquisition, storage, retrieval and use of information in health and biomedicine. The competition challenge was in the area of Natural Language Processing for Clinical Data.

"The project was to find relations in text documents, correlations in medical documents," said Hinote, who worked eight years as a mechanic before pursuing computer science. "Doctors have piles and piles of documents to read. Wouldn't it be great if doctors could have a machine run through the documents and give them meaningful information? A doctor could pose a question and have a machine answer it, based on the documents it was given to analyze. It's not really that simple, but that's a key part of it."

Hinote no longer works as a mechanic. He receives a stipend funded by a National Science Foundation Research Experience for Undergraduates (NSFREU) grant to work in Chen's Artificial Intelligence Lab while attending school. Hinote said he decided to pursue computer science because he likes it and he's good at it.