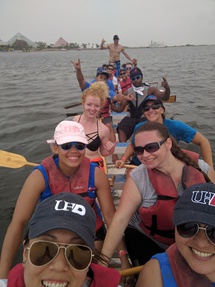 Racing the 300-meter dash on Offatts Bayou, the UHD dragon boat team competed against teams from Louisiana and Texas, and placed first in races one and two. The team placed second in the third and fourth races, taking home the silver medal overall.

The team would like to thank the UHD Office of University Relations for donating team t-shirts and UHD sunglasses.