UHD Students Inspired by Around the World Israel Event 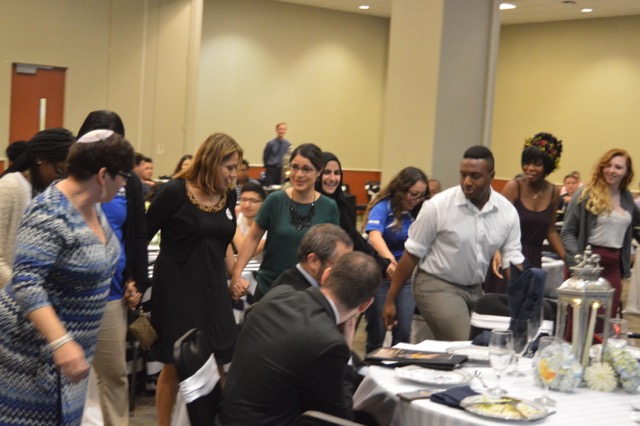 At the event, College of Public Service Associate Dean Myrna Cohen reflected on her time living, teaching and studying in Israel. She shed light on Israeli education system's cultural diversity. She also reflected on classes being conducted six days a week and language instruction in Hebrew, Arabic, and English. Cohen also discussed how the students helped run of the school.

Daniel Agranov and Guy Cohen, diplomats from the Consulate General of Israel to the Southwest, also shared stories and videos showcasing contemporary Israel. The videos portrayed a modern Israel with cities filled with gleaming skyscrapers, a progressive political system with inclusive public policies, a tech-savvy workforce that has made Israel the "start-up capital of the world," a thriving arts scene of film festivals, art gallery openings, and contemporary ballet, bustling outdoor cafes and restaurants, and a flourishing tourism industry focused on Israel's beaches, food scene, café culture, parks, and religious sites.

Explaining the ingenuity of the Israeli people, Agranov said, "People in Israel who fail are respected more than those who do not try."

The event was well received by the students. Students had an enriching experience and enjoyed learning about Israel.

In the weeks following the event, Dalton's students began searching for children's literature in English that portrays the modern Israel they learned about at the Around the World event. This proved to be a rather difficult task. Dalton's students learned that most children's literature utilized in U.S. schools about Israel focuses on the Holocaust, Jewish folktales, and stories about Jewish holidays. Commonly utilized literature like "The Diary of Ann Frank" and "The Boy in the Stripped Pajamas," relevant to the creation of Israel as a country and the customs of Jewish people around the world, fail to inform children about contemporary, multicultural Israel.

Dalton explained that to successfully teach reading in a multicultural classroom, teachers need to understand the cultural backgrounds of all their students and provide reading materials that accurately represent the cultures of their students.

Eventually, the graduate students located three informational books for children and a children's picture book picture that all portray modern Israel and Israelis. Interestingly, after extensive searching in public libraries, online databases, and online retail book stores, they were unable to locate a narrative fiction book for older children that is set in modern Israel.

The three informational books on Israel for children, one published by National Geographic, contain up-to-date information and photos of contemporary Israel.

Urban Education student Vianca Castillo stated, "The book "Israel" by Marcia Gresko is a student-friendly, non-fiction book that lends itself to a classroom research project or the foundation of a pen pal project between US and Israeli students."

She continued, "The children's picture book, "Sammy's Spiders First Trip to Israel" by Sylvia A Rouss, provides a colorful, vivid tour of Israel. She explained that the picture book exposes young children to the sights, sounds, and smells of modern Israel and includes basic, easily comprehensible words in Hebrew. "

The Urban Education graduate students look forward to the next Around the World event and connecting what they learn to locating multicultural children's literature that broadens the cultural horizons of their students.

The event was hosted by UHD student Eisha Kahn.

UHD Students Inspired by Around the World Israel Event