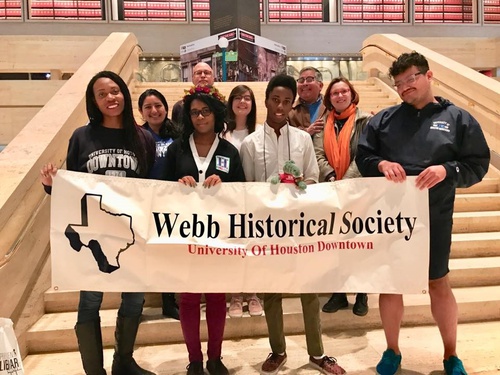 The TSHA Fall Meeting included tours of the archives and the new exhibit building at the Dolph Briscoe Center for American History, and an exploration of the Lyndon Baines Johnson Presidential Library and Museum.

At the Briscoe Center, students observed a variety of exhibits, including a statue of Confederate president, Jefferson Davis. The divisive statue was previously displayed on the campus of the University of Texas at Austin until its removal in 2015.

"As an individual who only moved to Texas two years ago, being involved in Webb Society is a way to learn more about my new home," said Webb Society Member and UHD student Jasmine Major. "With every project and every trip, I learn more about this vast state that is shrouded in history. This latest trip to Austin was a wonderful opportunity to see the capitol of Texas from a historical perspective."

During the trip, the club also attended a lecture focused on Davey Crockett and the Alamo. There has been much debate over the death of Davey Crockett and the authenticity of the diary of Daniel de La Peña (housed at the Briscoe Center). The diary claims that Crockett was executed by the sword of Santa Ana as opposed to popular myths that have him die heroically in battle.

Highlights of the LBJ Library visit included viewing the desk where President Johnson signed the Voters' Rights Act of 1964, as well as the clothes he and Lady Bird Johnson wore the day he was sworn in after the assassination of John F. Kennedy.

The Garna Christian Chapter of the Walter Prescott Webb Society was established in 1975 and is one of the oldest clubs on campus. Named for historian and UHD professor emeritus Garna Christian, the organization is open to students of all majors and is committed to fostering the appreciation, understanding, and teaching of the rich and unique history of Texas. The organization celebrates Texas history through programs and activities that encourage and promote research, preservation, and publication of historical material affecting the state of Texas.

The next Webb Society event will be a History Walk through historic downtown.

"The Webb Society is a valuable resource for me as a history major," said Webb Society and UHD student Helen Martinez. "I get to work with and interact with professionals and fellow scholars in my area of study, as well as attend lectures and presentations. Through the Webb Society, I have opportunities to present my own research and gain experience that will prove useful later in my career. These advantages give me an edge in my academic career early on and allow me to better understand how to be a better researcher, writer, and historian."