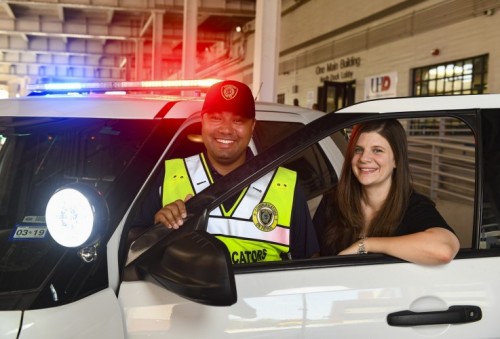 Houston is a hub of diversity. As the fourth largest city in the United States, it’s home to many communities that converse in a variety of languages.

Criminal justice students from UHD’s College of Public Service are among the Houstonians serving as Communicators on Patrol. This initiative was recently launched by the Houston Police Department (HPD) and will utilize volunteer translators, who will accompany officers as they patrol their beats. In addition to UHD students, citizens who speak Spanish, Vietnamese, Chinese and other languages are eligible to participate in this program.

“There are a number of bilingual HPD officers, but in a city this size, there’s certainly not enough,” said Beth Gilmore, coordinator of the Criminal Justice Internship and Career Services Program. “Our students and the other Communicators on Patrol will help fill that void and build trust with officers.”

Students will gain invaluable experience and earn internship credit through the program. Gilmore, who also serves as a criminal justice lecturer, said that this initiative provides an opportunity for practical hands-on training in law enforcement. It also accommodates students’ busy schedules.

“Many of our students are balancing school, multiple jobs and families,” Gilmore said. “This internship allows them to select a shift that best accommodates their schedules. If they want to work weekends, holidays or evenings, they will be able to do that. They also can select a sub-station at which to volunteer.”

As Communicators on Patrol, students also will receive training on HPD radios and department policies. Additionally, they undergo scenario-based training that will prepare them for working with officers and citizens.

Among the participants is senior criminal justice major Ronald Restrepo. He applied to the program because he was interested in working with the community alongside our city’s peace officers.

“This is a great opportunity for any student at UHD, especially if they are planning to become police officers,” Restrepo said. “The internship opens many doors to experience actual police calls. They are real and not simulated, which makes this program extremely rewarding and worth it.”

Restrepo, who is fluent in Spanish, has aspirations of becoming a police officer. He already uses his bilingual talents to help others and looks forward to working alongside with HPD.

“I have helped to translate for several people when they are buying something at a store and don’t know how to ask for an item in English,” he said. “This internship opens many doors to experience police work and to assist officers on real calls.”

Communicators on Patrol was announced by Houston Police Chief Art Acevedo during a press conference June 18. Gilmore and student participants were in attendance at this event.

“When people are the victims of a crime or are the witnesses of a crime, we want to make sure we get the information right,” Acevedo said at the conference. “We also want to break down barriers and communicate effectively.”

Student Communicators on Patrol will begin accompanying police officers this summer. While nine students have been vetted and trained by HPD, more are set to join the program.

“When our students graduate and enter the workforce, they need both an education and experience,” Gilmore said. “Serving as Communicators on Patrol will perfectly complement the lessons learned in our classrooms and prepare them for careers in law enforcement and criminal justice.”