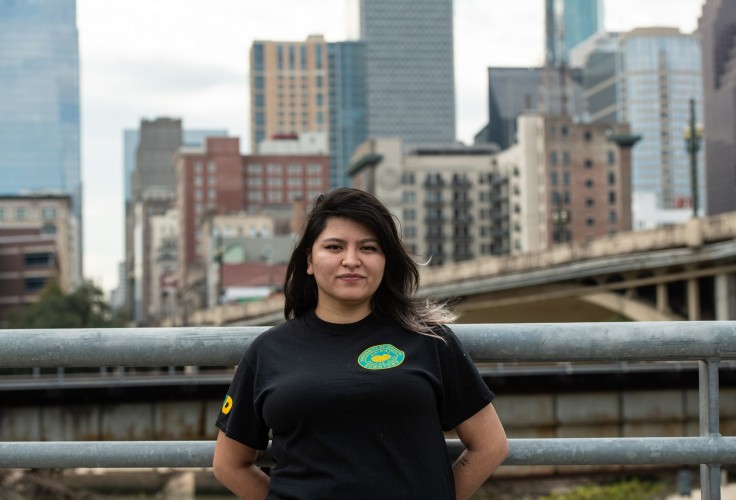 University of Houston-Downtown (UHD) junior, Amaris Sanchez, believes that together, we can save them all.

That is, Houston’s oversized population of strays. As the current president of UHD’s Animal Rescue Club (ARC), Sanchez has donated more than 150 volunteer hours at local Houston animal shelters, with no plans of stopping.

The 2013 graduate of Sam Houston High School began her post-secondary education at Houston Community College (HCC). Like so many college students, Sanchez struggled with what career path to pursue, but eventually decided on marketing.

One thing she always knew, however, was that she wanted to attend UHD. After passing it every day on the MetroRail to HCC, it seemed like a natural next step.

“The transition was so much easier than I expected,” Sanchez remembers. “I attended UHD's Transfer Thursday and by the end of the day, I was enrolled.”

After starting classes in 2017, the then business major felt something was amiss.

“I struggled to feel a connection and passion towards my business classes,” said Sanchez. “I was chasing things that I thought would make others happy, but I knew something was missing.”

Sanchez joined ARC during the fall semester of 2017, and finally began to feel more comfortable at UHD.

“Learning how organizations get students to become active and volunteer has shown me how much compassion there is at this school,” said the avid volunteer who has adopted two pups of her own. “I love how much UHD gives back to its community.”

Helping to grow the organization has given her a great sense of accomplishment and her newfound confidence led her to take control of other areas of her life.

In the spring of 2018, Sanchez changed her major to psychology. Making this change has helped Sanchez cultivate meaningful relationships with her professors.

“Since switching over, I'm really getting into my classes and doing well,” said Sanchez. “One of my psychology professors, Dr. Anderson, is one of my favorite faculty members. Her classes are challenging, but they make me feel compelled to take part in the conversation and contribute.”

The newly declared psychology major has post-graduation plans to work with youth and adolescents in the Aldine area of Houston. She wants to be for them, the person in the community she needed when she was a growing up.

Sanchez's successful transition from HCC to UHD is an example of both institutions’ commitment to the Houston Guided Pathways to Success (Houston GPS) initiative. This multi-institutional partnership fosters collaboration among area colleges and universities with the goal of helping students graduate on time and with less debt. Additionally, Houston GPS is focused on streamlining the transfer process between local community colleges and universities.