UHD Student Uses Difficult Past as Motivation to Succeed 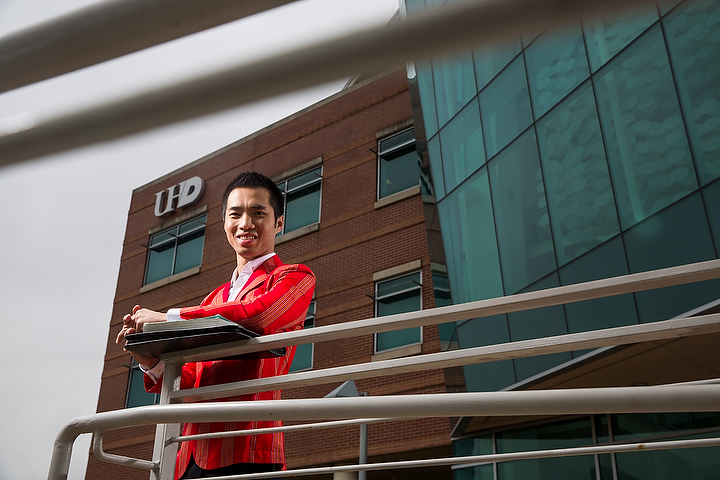 Everyone experiences hardships in life's ebb and flow—it's normal—but University of Houston-Downtown (UHD) senior business student Nic Shar experienced a life far less ordinary than most of us will ever understand.

Shar is from the Southeast Asian nation of Myanmar, also known as Burma, which borders Bangladesh and Thailand. Since 1962, the country has been ruled by a military dictatorship and more than 100 ethnic groups have been engulfed in the world's longest civil war.

As a result of the ongoing conflict, Shar's home country has been filled with extreme poverty, violence, political oppression, and human rights violations.

"My education was quite unusual," said Shar. "Because of the fighting, my family never stayed anywhere for more than two years. We were constantly fleeing our village and hiding in the mountains until it was safe. Each time, we would have to clear forest to make a new home and set up makeshifts schools."

"I hated hills when I was young," said Shar. "We had to carry water for the village over long distances and uphill. There was no electricity, irrigation, or modern medicine. Life was fragile."

In 1995, Shar's parents decided it was no longer safe to live in their own country, so they fled to the Thailand border where thousands of refugees lived in camps established by the Thai government.

Over the next 10 years, Shar completed high school and journalism school while in Thailand. He worked briefly as a journalist, riding his motorcycle from camp to camp, until his family was selected for resettlement in the United States.

On July 4, 2006, Shar and his nine family members arrived in America where they shared a three-bedroom apartment.

"At the time, I thought our apartment was amazing," laughed Shar. "Recently, I purchased a home, which makes me very proud."

Clearly, this 31-year-old husband, father, and full-time student is success driven. After graduating with an associate's degree from Houston Community College (HCC), Shar enrolled at UHD, alternating time between the downtown campus and off campus centers at UHD at Lone Star College-Kingwood and UHD Northwest. Shar is majoring in General Business and minoring in Management and says that the online classes and flexible schedules work well with his busy life. He is expected to graduate in May 2017.

This incredibly self-aware, determined, and confident man's childhood was filled with war and genocide, but he has chosen not to allow his past to determine his future.

"Nic has clear goals and constantly challenges himself to evolve and achieve more every day," said Dalia Sherif, adjunct lecturer at UHD College of Business. "He has inspired the class with his passion to persevere. To him, failures make you stronger."

"As president, my goal is to help Karenni-Americans adapt to life in the United States and reach their full potential," said Shar. "I resettled here when I was 21, and it was a huge culture shock, so I know what it is like. When I help someone, it makes me happier than my own accomplishments."

UHD Student Uses Difficult Past as Motivation to Succeed