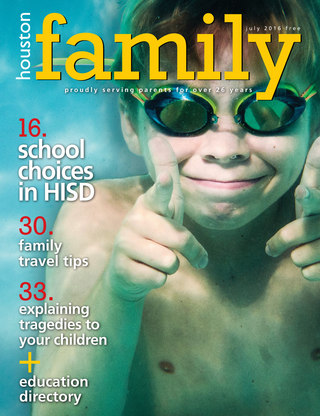 Award-winning University of Houston-Downtown (UHD) English major Dana Robinson wanted to dig deeper into "school choice," a subject that she'd been discussing "all too often" with other parents in her neighborhood. "As a mother and a concerned member of my community, whether at the park with my son, dining out at a restaurant, or visiting with friends, school choice and the Houston Independent School District (HISD) magnet lottery seemed to find its way into almost every conversation I had," she explained.

Robinson enrolled in UHD English Professor Anthony Chiaviello's Advanced Feature Writing class (English 4323) for the fall 2015 semester; he assigned her to write a full-length feature article on a timely and compelling subject of her choice. Robinson was already fascinated with the arcane complexities of school choice, having found that the question, "What school do you go to?" is almost never met with a simple answer. It's usually qualified with statements like, "We are hoping to get into . . .," or "We are on the waiting list for . . .," or "We got lucky and got into . . . ."

"Of the nine children who live within a few blocks of our house, not one of them actually attends our local school. I wanted to know why," said Robinson. "I wanted to know why getting into kindergarten had become so complicated." Her research included an informal opinion survey of a score of parents in her neighborhood that brought focus to the issue and prompted her to explore further.

In addition to researching and writing feature stories of varying length, students in Professor Chiaviello's course also learn to pitch their stories in letters to editors at relevant magazines that accept—and pay for—such freelance story contributions. Assignments that simply propose story ideas—as well as query letters that cover actual manuscript submissions—are included as part of the course material and students are assigned to actively follow through on the process by completing and sending out story manuscripts. "I've found that if students develop story ideas on interesting topics and query editors of relevant publications, they have a better-then-even chance of having their stories see print," Chiaviello said. He is offering the class again in the fall 2016 semester.

Robinson's inquiry into school choice led her to discover much about the HISD magnet system and the impact school choice has on Houston communities. Her article of more than 2,500 words also looks at two local non-profits—Learn Local and Mission Squash. The story takes an evenhanded look at the situation becoming, "a bit of a good news/bad news story, but ultimately it leaves the reader with genuine hope for Houston's educational system and the children of our city."

Robinson pitched her story to a few local magazines, and it was quickly accepted by Houston Family. When the editors read the finished product, they decided to run it as the lead article in the July issue. Dana Robinson's story begins on page 16.