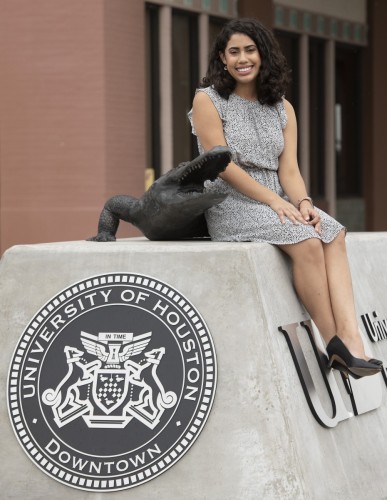 Historically, Texas has ranked very low in voter turnout with only about one in three people showing up to the polls for midterm elections.

With Election Day on Nov. 6 fast approaching coupled with the tense political climate, there's been a record-breaking surge in the number of registered voters. Notably, University of Houston-Downtown (UHD) senior and president of UHD’s chapter of Texas Rising, Jocelyne Torres, has registered more than 400 voters in conjunction with the organization since June.

Texas Rising, part of the Texas Freedom Network, is a movement of diverse, politically engaged Texans under the age of 30 who are working to leverage their power through community organizing, electoral politics, and public policy advocacy.

A Texas Rising member since 2016, Torres assumed the role of president in June, became a voter registrar and began registering voters right away.

“With Texas Rising, I started this past summer by registering voters at the Houston Pride Parade,” said Torres. “It’s important to be active on campus, but we also go into the community because every person counts. Even if we only get five people registered in one day; that's five people who are more empowered to speak up and vote for issues they care about.”

Since August, UHD’s Chapter has made itself accessible to register voters twice a week and ensure they provide voters the right information.

“We are not only registering people to vote,” Torres adds. “We are making sure they know when, how and where to vote.”

The political science major and C.E. King High School graduate is passionate about politics. Texas Rising gives Torres a platform through which she can affect change.

Torres, who is currently applying to law schools, will graduate in May 2019. She hopes to attend The University of Texas School of Law and become an immigration attorney. Born to immigrant parents, this issue inspires much of her political activism.

“There’s a lack of clear information out there for immigrants and I really want to be an attorney who can help them,” said Torres. “Also, I will be the first attorney in my family and it will be such a great feeling to be that trailblazer.”