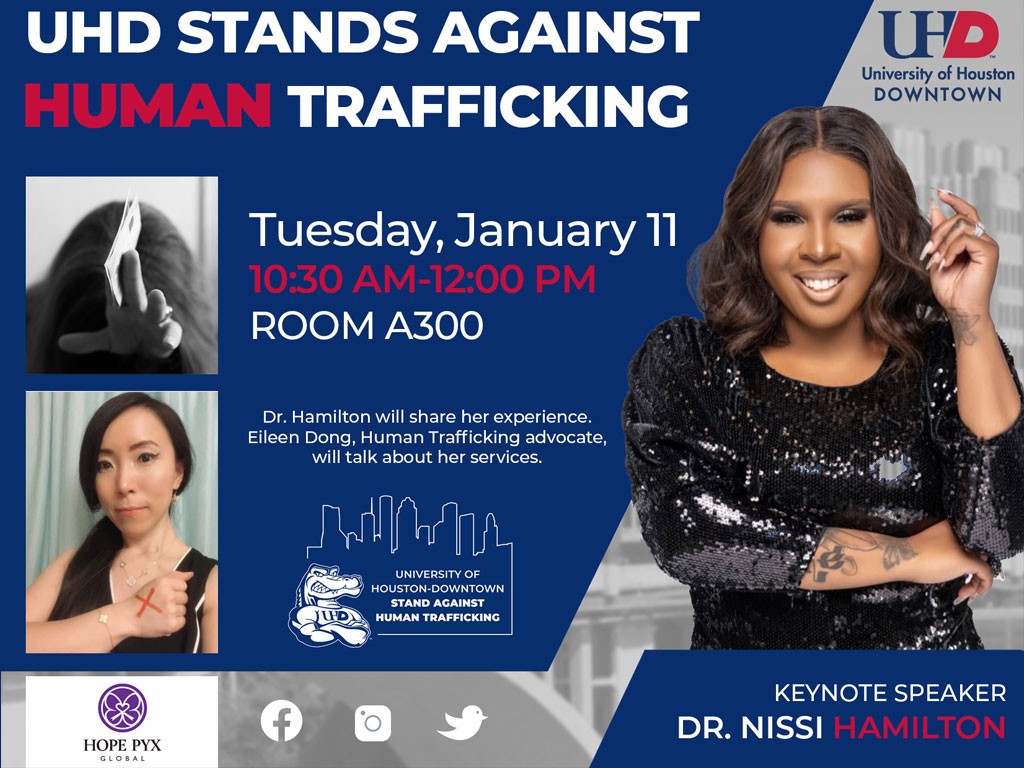 The statistics are astounding. Texas ranks No. 2 in human tracking cases across the nation. At any given time, there’s an estimated 24.9 million victims worldwide.*

In recognition of Human Trafficking Awareness Month, the University of Houston-Downtown is joining the fight against this worldwide crisis with the Office of the Attorney General of Texas’ Human Trafficking and Transnational/Organized Crime Division.

The University Community is invited to a special event on Tuesday, Jan. 11, from 10:30 a.m. to Noon,  in Academic Building, Room A300 for National Human Trafficking Awareness Day. In an act of solidarity, the community is being asked to wear blue.

The event will feature guest speaker UHD Alumna Dr. Nissi Hamilton who will share her journey through human trafficking and her passion for advocacy work. Hamilton is human trafficking survivor and founder of A Survivor’s Voice of Victory. The Navy veteran earned an MBA at UHD. The City of Houston acknowledged Hamilton as the “Poster Child” for survivorship in Houston after being trafficked as a child and an adult. Anthony Maroulis, Missouri City Council Member District C, declared Hamilton’s freedom from slavery on January 21, 2020. Hamilton was also a 2021 International Women’s Month Honoree.

Also joining event is Eileen Dong, spokesperson for Hope Pyx Global — a 501(c)3 non-profit organization dedicated to the awareness and prevention of Family Violence, Sex Trafficking and Sexual Assault locally, nationwide and globally. Dong will share information about Hope Pyx’s mission and vision while bringing awareness to the signs and resources available to those who may be victims of human trafficking.

UHD President Loren J. Blanchard will be on hand with remarks on UHD's role in its stand against human trafficking. The event also will include the awareness segment, the Texas Blue Sand Project, in which blue sand is poured into a sidewalk to “fill in the cracks” to show human trafficking survivors that they are seen and we stand with them. The UHD Community is encouraged to support the effort using social tags: #TXBlueSandProject, #EndLaborTrafficking, #EndSexTrafficking, #TexansAreNotForSale.

Human trafficking is a crime of exploitation; traffickers profit at the expense of their victims by compelling them to perform labor or to engage in commercial sex in every region of the United States and around the world. Human traffickers prey on adults and children of all ages, backgrounds, and nationalities, exploiting them for their own profit.