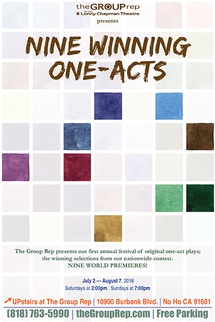 Neil Orts, Transfer Articulation Counselor at University of Houston-Downtown (UHD), was one of nine playwrights chosen for the first annual festival of one-act plays, Nine Winning One-Acts, being produced this summer at the Group Rep, the new black box space at the Lonny Chapman Theatre in North Hollywood, California.

Orts' 10-minute play, February to August, was chosen from more than 150 entries from around the country. In the play, Andrew, a college student, is home between semesters visiting his dying Aunt Patty. "She gives the appearance of being reconciled to her impending death, even joking about it, but by the end of the play, we learn she does have a defense mechanism in place to hold off the inevitable," said Orts.

February to August was first performed in November 2015 in the UHD O'Kane Theatre as one of six plays directed by students enrolled in Directing and Stage Management (DRA 3332). This performance served as a workshop, after which Orts did minor rewrites.

The Group Rep Theater production will be the first full production of the play.