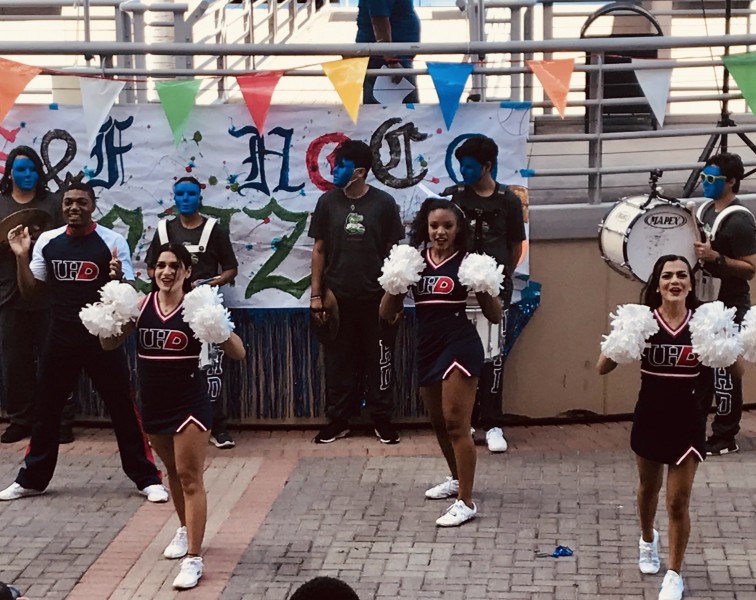 Houstonians know that Gators are indeed determined … dedicated … and working and studying hard downtown. So, it’s only fitting that the University of Houston-Downtown is represented during the upcoming
H-E-B Thanksgiving Parade, which is set to roll through Downtown on Nov. 25.

UHD’s Cheerleaders and Gatorettes Dance Team will return to the annual parade following a year off due to the pandemic. Participating in this high-profile event spotlights UHD’s role in the community and further elevates its visibility among Houstonians and the many visitors who flock to the city to witness this spectacle.

These University spirit ambassadors join a who’s who of Houston influencers, other universities and area schools participating in this annual tradition.

The 72nd Annual H-E-B Thanksgiving Parade will begin at 9 a.m., Thursday, Nov. 25 and will start at Lamar and Smith streets, just blocks from campus. The full route and other details are available on the parade’s website, and the event will be broadcast on KHOU Ch. 11.

The University’s Cheer and Dance teams are indeed familiar to the local community through appearances at this popular event and other parades such as the MLK Grande Parade and the Houston Livestock Show & Rodeo Parade.

On campus, UHD’s Cheerleaders and Gatorettes promote school pride at sporting events, pep rallies and other campus-wide activities. Both teams are based within UHD Sports & Fitness and have represented the University at cheer competitions, including the National Cheerleading Association Spring Classic and the American Dance/Drill Team Collegiate Nationals.

“It is tremendously important for the public to see and hear UHD’s name at the parade and to know that UHD is an integral part of the Houston community,” said Richard Sebastiani, Director of Sports & Fitness. “We appreciate our spirit teams serving as our ambassadors at the H-E-B Thanksgiving Day Parade. All of us at Sports and Fitness thank the parade organization for the opportunity for our University to be part of this wonderful holiday tradition.”