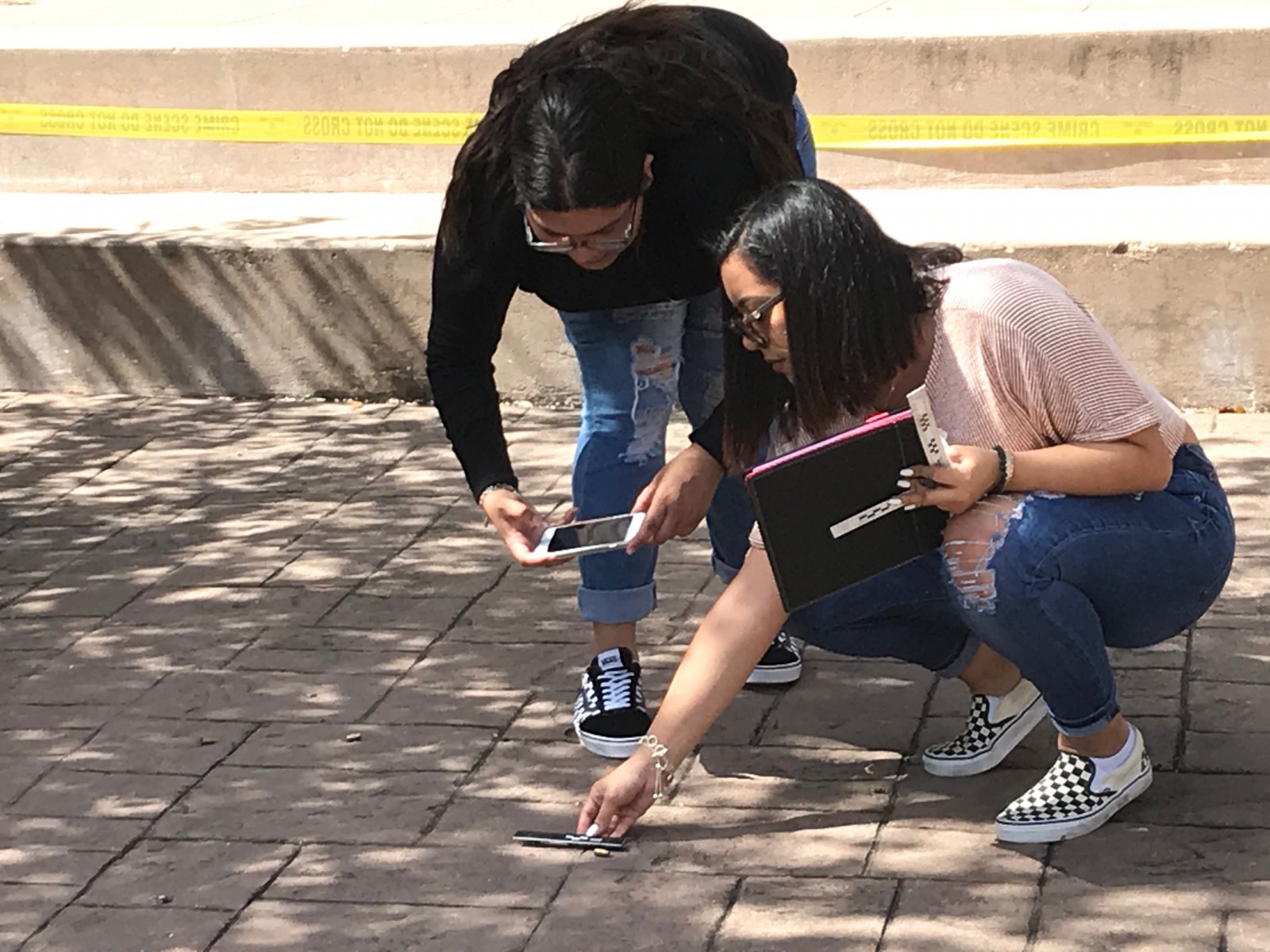 No police are on site, but yellow tape is wrapped around the University of Houston-Downtown’s Commerce Street courtyard. A group of students are on the scene analyzing bullet casings, blood stains and other items indicating foul play.

Watching nearby are UHD criminal justice professors Dr. Kevin Buckler and Dr. Elizabeth Gilmore, who offer encouragement and constructive criticism as students lay down evidence markers and continue their investigation.

The good news is that no one has been injured, no shots were fired, and the “blood” is not real. The exercise is just another timed training exercise for UHD’s Scene Investi-Gators, a student organization in the University's College of Public Service.

This week, two groups will put its investigative skills to the test when it competes at a regional Crime Scene Investigation competition at the Southwestern Association of Criminal Justice (SWACJ) Annual Meeting in Houston. (CSI) Oct. 16 - 18.

Sophomore criminal justice major Jessica Castillo serves as president of Scene Investi-Gators and is ready to apply what she’s learned from her professors and mentors.

The competition, she said, will create a mock crime scene. Student teams must successfully and quickly follow the meticulous CSI protocol, which includes securing the scene; identifying, documenting and properly handling evidence; and many other critical steps in the investigation.

After completing the investigation, students must then collaborate on an official report to be delivered to the competition’s judges.

The experience will be invaluable to her growth as an aspiring criminal justice major, she said. And her involvement with Scene Investi-Gators reinforces her passion for law enforcement.

“My first experiences with criminal justice were the things I saw on TV,” she said. “But, I’ve learned at UHD that what is presented on TV is an exaggeration. Through my participation in Scene Investi-Gators, I’ve gained knowledge and skills that can make a difference in solving crimes and upholding the law.”

The competition is Castillo’s first, so she and other students have turned to fellow Scene Investi-Gator Izzy Moreno for guidance. Moreno previously represented Lone Star College in a SWACJ CSI competition. She serves as a mentor and develops training materials for her peers.

Her biggest advice for those competing this week are to stick together and remain calm, cool and collected.

“Teamwork and confidence are important,” Moreno said. “If everyone sticks to their roles and works together, we’ll be fine.”

Scene Investi-Gators was founded as part of a University-wide initiative to engage First-Time-in-College Students in their respective academic disciplines. Dr. Gilmore founded the organization and serves as its adviser, using her expertise in crime scene investigations to guide students.

"The group meets regularly and engages in a series of practicums and lectures to learn the process of crime scene investigations, which covers the documentation, collection and preservation of physical evidence," Gilmore noted. "This process has been done chronologically and very methodologically, similar to how one documents a scene. It's excellent preparation for future law enforcement professionals and a great way for students to bond with one another while learning."