UHD Ranked Among Universities with Best Return on Investment 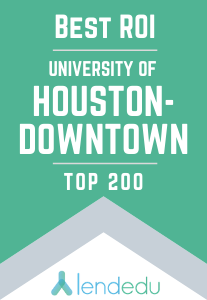 When considering a college or university, there are a lot of decisions to make—from the location to course offerings, it’s also important to consider projected salary and debt levels after graduation.

According to LendEDU’s recent study, the University of Houston-Downtown ranked No. 180 among 798 private and public four-year colleges and universities in the United States for the best return on investment for the average student.

It’s commonplace that many students graduate with tens of thousands in debt, making achieving life goals more challenging—from home buying to raising a family. That’s why future salary is important to consider because having higher income makes it easier to repay the debt taken on to pay for college.

Per LendEDU, the College Risk-Reward Indicator is defined as the risk of attending a four-year college or university as the average student loan debt per graduate at that institution. The reward of attending that same four-year college or university is the average early career pay for graduates. Average early career pay for graduates is defined as the median salary for alumni with bachelor’s degrees with 0 to 5 years of work experience. To calculate the CRRI for each school, the following formula was used: CRRI = Average Early Pay / Average Student Loan Debt at Graduation.

The key to being financially prosperous as a college graduate is having low student loan debt and high income. On the other hand, high levels of debt and low pay are a recipe for financial hardship.

The site's recent data also showed that graduates with student loans have $28,565 in debt on average upon graduation. Also when factoring students with no debt, the average is still $16,649.

UHD Ranked Among Universities with Best Return on Investment