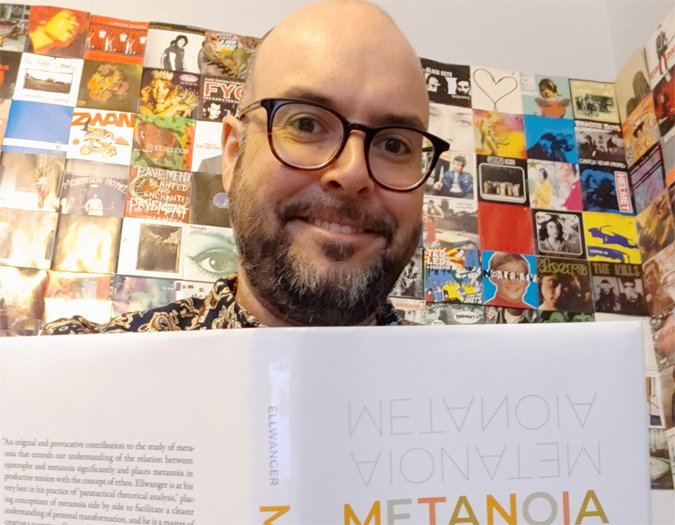 This new monograph (a detailed written study of a single specialized subject or an aspect of it) charts the history of metanoia (a transformative change of heart especially a spiritual conversion) from its original use in the classical tradition to its adoption by early Christians as a term for religious conversion. Metanoia comes from the Greek term “metanoiein” meaning to change one’s mind or repent.

The Director of the Masters of Arts in Rhetoric & Composition Program and Professor of English, Ellwanger shows that metanoia involves a change within a person that results in a different version of him- or herself — a change in character or ethos. He then applies this theory to our contemporary moment, finding that metanoia provides unique insight into modern forms of self-transformation.

Q: What prompted you to write or see a need for this book?

A: I realized that there was a lot more to say on the topic of metanoia after writing an essay on public apology. Apologies involve a kind of metanoia when people make statements like “look, I’ve become a new person; that’s not who I am or I’m not that person anymore and I’m so sorry.” A couple of examples of modern transformation resonated with me. One was when Bruce Jenner announced becoming Caitlyn Jenner and how it was positively received by the media. That was followed shortly by news of Rachel Dolezal (former head of the NAACP in Spokane, Washington) who identified herself black, but it was discovered that she actually was Caucasian. Predictably, the media was like, “no you can’t do that — that’s appropriation.”

We teach in the humanities that both race and sex or gender are social constructs that are created by society and are on some level not ‘real’ in the common sense of the word. It was really interesting that when it was Jenner, most people accepted sex and gender as a social construct, but in the negative reaction to Dolezal, race went from being a social construct to being an absolute biological reality that you can’t change. And I thought that divide was really interesting, so from there I started more research on personal transformation.

Q: So, what do you want your audience to grasp from your book?

A: Metanoia is a word not many people know. It’s a weird word. In part, my book shows that the term has been used in many different ways over the course of history. Some 3,000 years ago in the pre-Christian world, what metanoia meant was to “take a statement back.” But once a statement is out there … how do you take it back? In the first century, Christians reinvented metanoia as a form of regret for a former self in an attempt to be born again. In Christianity and early Christian discourse, metanoia comes to be not just an exchange of speech, but an exchange of self.

Q: How would you define today’s world of metanoia?

A: In the last 300 to 400 years of Western history, people have come to believe that it’s unfair how society determines one’s identity and imposes limitations on how you live. I think that we’re now seeing a culmination and a full blooming of the idea that deep inside, you know who you are and it’s your moral obligation to get the people around you to realize that you’re an individual, and that who you are and how you live is not going to be determined by external forces. This is viewed as a kind of liberation, and it certainly may be; however, I personally see positives and negatives in how our modern era frames it as though everybody’s obligated to recognize you for who you say you are and not for who your family and society says you are.

Today, metanoia has been reinvented as an affirmation of a hidden self, not a new self, but the self that was hidden before. For example, Caitlyn Jenner will assert that the former identity (“Bruce”) was strategy to conceal the true self embodied by Caitlyn — an identity that was always there under the surface. 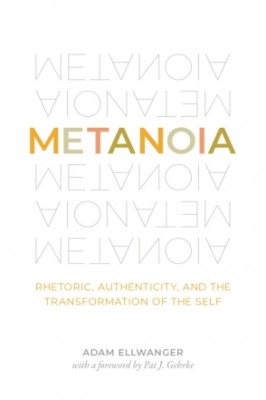 Q: Do you use the book’s subject matter in any of your classes?

A: I think I may have taught a chapter from it. In my graduate rhetoric courses, we talk about ethos or credibility and who you claim to be. We talk about the ways that language forms ethos (the characteristic spirit of a culture, era, or community as manifested in its beliefs and aspirations) and how speaking about themselves and who they are is one way that people establish recognition and authority in the eyes of the audience.

Q: With all the movements such as Black Lives Matter, #MeTooMovement and others, how as a country can this ideal of metanoia be a catalyst for change?

A: As individuals I think we’re all looking for a change of heart. The way our country can move forward at a societal level is to seek a collective metanoia, which is going to require some repentance and humility. Now the question is, if metanoia has always been theorized as a personal phenomenon, can it be transformed into a collective societal phenomenon?