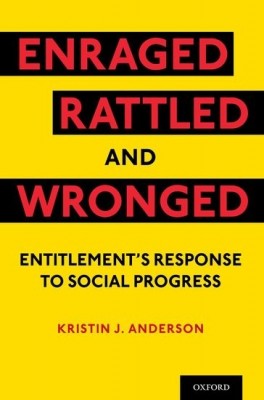 Political and social divisions continue to fuel a simmering anger within our nation. This year alone, the United States has experienced a government insurrection and further violence toward people of color.

According to University of Houston-Downtown professor Dr. Kristin Anderson, these and other hostile incidents are prime examples of entitlement in action.

In her new book, “Enraged, Rattled and Wronged: Entitlement’s Response to Social Progress,” Anderson addresses the very concept of entitlement and its ongoing role in perpetuating aggression, dissension and confusion within our world. More than that, her text ultimately focuses on how entitlement drives inequality among members of society.

“Entitlement is a sense that one is deserving based on their preferred status,” said Anderson, Professor of Psychology and Fellow in UHD's Center for Critical Race Studies. “It’s the belief that one should be treated well for who you are rather than what you’ve done. Problems arise when people who feel entitled perceive that they are not being treated right.”

Anderson cites the aforementioned Capitol riot as an example of individuals with a sense of entitlement aggressively acting out against a presumed threat to their way of life.

Other examples addressed in her book include the “Karen” syndrome that has been used to describe incidents of white women calling the police when people of color are thought to be committing transgressions. Voter suppression, men’s violence against women, the celebrity college admissions scandal, and backlash against critical race studies also are models of entitlement, she said.

“Entitlement is related to privilege and power,” she said. “It also has a direct impact on anti-democratic ideologies and attitudes such as authoritarianism, misogyny and racism. Of course, the most extreme result of entitlement is violence, which includes domestic violence, sexual assault and gun violence.”

During the pandemic, Anderson said, attitudes of entitlement also extended to those not wanting to wear a mask or get vaccinated.

“Entitled people feel that they don’t have to follow the same rules or laws that everyone has to,” she said.

The book’s arrival comes at a time when it’s critical to recognize entitlement and its effects on society, Anderson adds. As social and political gaps widen (to the point of provoking violence in many instances), it is important to understand the factors that influence entitled individuals.

“We are seeing more and more examples of people who think they are ‘losing out’ and that our world doesn’t look like it did 50 years ago,” she said. “Their response is often confusion and rage. Entitlement explains many recent events … but it’s been happening for many years.”

Anderson will use this text in her “Psychology of Prejudice” class at UHD. It complements previous books she has written including “Modern Misogyny: Anti-Feminism in a Post-Feminist Era” and “Benign Bigotry: The Psychology of Subtle Prejudice” (selected as one of Book “Riot’s “35 Must-Read Books About Racism”).

“This book may help some people recognize their own sense entitlement,” she said. “It also will be useful to people on the receiving end of hostilities from those who feel entitled. It provides a structure and language to understand what is happening in our world.”