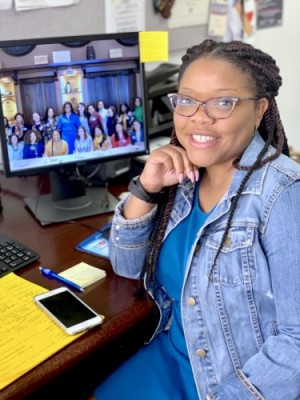 When University of Houston-Downtown (UHD) professor Dr. Felicia Harris received an invitation to join a book club, she didn’t immediately jump at the opportunity. She was still new to Houston and wasn’t ready to commit to a social group. After several invitations from friend and colleague, Dr. Creshema Murray, she relented. She couldn’t imagine that this decision would bring her face-to-face with one of her idols.

Earlier this month, Communication Studies professors Harris and Murray (along with their book club) were paid a visit by former First Lady Michelle Obama. Their organization, HTX Book and Brunch, won a sweepstakes and received tickets to Obama’s March 2 appearance at the Toyota Center (as part of her book tour promoting her memoir “Becoming”) and had extended an invitation to FLOTUS to have brunch with them via Instagram.

To Harris and Murray’s surprise and delight, Obama saw the invite and took them up on the offer to hang for brunch.

“It was the best two hours of my life,” Harris said. “We were wondering what we’d talk about or if we’d panic, but she was authentic and warm. Each of us were able to get in the zone and have a real discussion with her. Her responses were meaningful and honest. It was like having a great conversation with a mentor.”

Among the topics Obama addressed with Harris, Murray and HTX Book and Brunch were the challenges of being a First Lady, writing her book, and the importance of sisterhood—one of the necessities for overcoming her challenges.

“She looked beyond the questions we had and hit us back with questions of her own to connect with each one of us,” Harris said. “The discussion was very fruitful, and at times, I was moved to tears.”

As a result of this experience, Harris contributed an article to the Huffington Post describing the meeting. The brunch was also covered by the Houston Chronicle.

As an educator, Harris walked away from the brunch with several insights to share in the classroom.

“The story of her ‘career swerves’ spoke to me the most,” she said. “This is a subject I can share with students at UHD … the need to discover what will fulfill you and how to embark on a trajectory to take you where you need to be personally and professionally.”