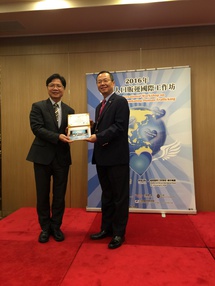 The 2016 International Workshop on Strategies for Combating Human Trafficking was held by the Republic of China's National Immigration Agency (NIA) in Taipei, Taiwan on July 27 and 28. Hsiao-Ming Wang, professor of criminal justice and University of Houston-Downtown (UHD) Bayou Connection Program Director, was invited by the NIA to serve as a panel commentator regarding anti-trafficking strategies. The NIA has been an academic and research partner of UHD via the Bayou Connection Program since 2012.

Human trafficking is a form of modern slavery and usually involves commercial sexual exploitation or forced labor. The difference of social-economic development between developed and developing countries significantly relates to the issues of human trafficking. Like the United States, Taiwan is a country of destination, especially in the fields of domestic workers and fishery workers.

During his presentation, titled "The Role of Police in the Prevention of Human Trafficking," Wang maintained that, "the police, as first responders, are a primary component of anti-human trafficking measures." To win the anti-trafficking campaign, the police should actively work with other agencies such as social workers and health care providers, Wang concluded.