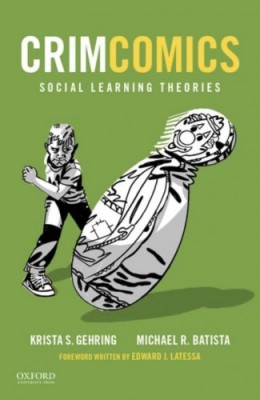 Comics or graphic novels continue to expand beyond standard super hero stories. Case in point, CrimComics (Oxford University Press), a series of graphic novels that serve as supplements to Criminal Justice textbooks at the University of Houston-Downtown.

The author behind these academic and informative texts is UHD Associate Professor of Criminal Justice Dr. Krista Gehring. She launched CrimComics four years ago and has steadily added new editions, including the latest one. Issue 8 is out now and addresses social learning theories.

According to Gehring, this new issue of CrimComics explores the theory that criminal behavior is learned. Scholars such as Edwin Sutherland, Robert Burgess and Ronald Akers have contributed research and literature supporting this notion that one’s interactions with either criminals or law abiding citizens can influence their behaviors.

Gehring plans to add Issue 8 to the list of texts required for her undergraduate criminology course. Since introducing them in her classes, CrimComics have proven to be popular.

“My students love them,” she said. “I use them as supplements to a more traditional textbook. They tell me that they learn the material much better when they read the comics and then the textbook material.”

Gehring said the popularity of CrimComics among students is that the use of art (created by Gehring’s collaborator Michael R. Batista) and text helps communicate concepts that might seem abstract in traditional books.

“CrimComics takes scholarly ideas and inserts them into a comic book medium that many individuals are familiar with,” she said. “If you haven't read a comic, you at least know what they are. Using this format engages the students: they are no longer reading paragraph upon paragraph, page upon page of text. By combining text and images, the students' brains are actively reading because they must make meaning from the interplay of text and images, as well as by filling in the gaps in between.”

According to Gehring, a total of 13 issues are planned for the CrimComics series. Issue 9 will address Psychosocial Theories and is in production. She is presently writing Issue 10 focused on Developmental Theories.

Students aren’t the only one applauding Gehring and Batista’s work on CrimComics. The graphic novel series earned first place in the College Book Series at the 32nd Annual New York Book Show in 2018.

“These comics aren't just for criminal justice students; they can be for anyone who enjoys comics and/or is interested in why people commit crime,” Gehring said. “Working on CrimComics is like a dream come true! Being able to combine my hobby and my scholarly activities in my career by writing criminology comic books is really something that I never thought would be possible.”