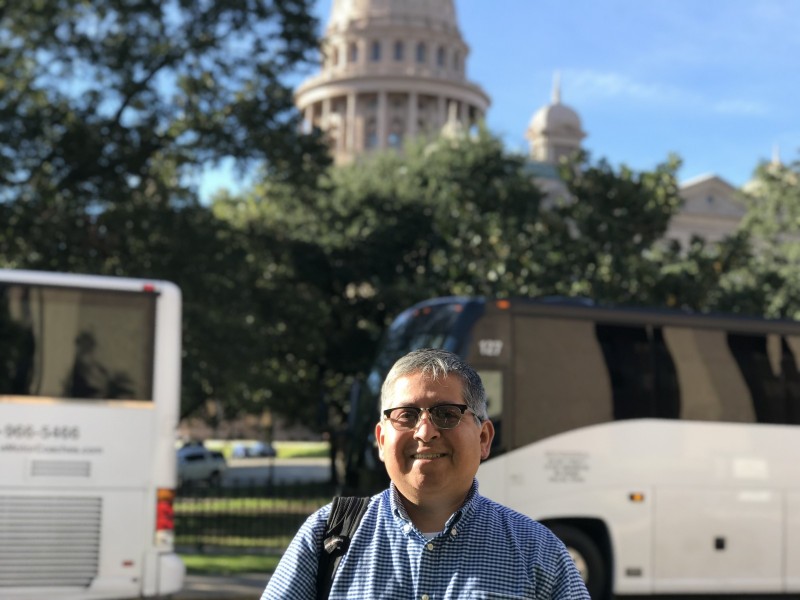 Dr. Gene Preuss has dedicated his career to teaching Texas history. Recently, the University of Houston-Downtown professor made history by joining an elite group of state historians.

Preuss, Associate Professor of History, was named a Fellow by the East Texas Historical Association (ETHA). The longtime educator and popular UHD professor has long been associated with the organization, which is committed to the preservation and documentation of the state’s eastern region.

During ETHA’s 2021 Fall Meeting in Nacodoches, Texas, members recognized Preuss as one of its newest Fellows. This honor recognizes those researchers, authors and academicians who have demonstrated excellence in scholarly activities related to the rich history of East Texas. Being named a Fellow is the highest honor bestowed to ETHA members. ETHA limits its Fellows to no more than 50 living members. Preuss replaces a recently departed Fellow.

“Being named an ETHA Fellow is a tremendous honor, since there are only 50 Fellows at any time,” Preuss said. “It’s bittersweet because you’re thankful yet realize that you became a Fellow because another was lost. To be recognized for your achievements by your mentors, former classmates….the people who know you best and appreciate what you’ve done…is the highest honor we can ever hope to achieve.”

Since joining UHD in 2004, Preuss has instilled a passion for Texas history within his students. As faculty adviser for UHD's Garna Christian Chapter of the Walter Prescott Webb Historical Society, he leads students on educational field trips and mentors them as they hone their talents as scholars. In 2018, the student group was named University Chapter of the Year and Preuss was named Faculty Adviser of the Year by the Texas State Historical Association.

At UHD, Preuss also has hosted visiting historians and statewide events such as the San Jacinto Symposium, Texas’ preeminent conference on the Texas Revolutionary era.

As an author, Preuss has contributed his talents to a number of volumes, including the memoir of former U.S. Secretary of State Lauro Cavazos, “A Kiñeno's Journey: On Family, Learning and Public Service.”

And as a historian, Preuss frequently contributes to media interviews related to historical events in Houston and Texas. In recent months, he was called upon to discuss a Civil War era cannonball found near Downtown Houston.

“Becoming a Fellow of the East Texas Historical Association is the highest honor the organization can bestow on an individual,” said Scott Sosebee, Executive DIrector and Editor for ETHA and Associate Professor of History at Stephen F. Austin University. “The honor of Fellow is reserved for individuals who publish Texas history—especially East Texas history—of the highest quality and make substantial contributions to the historical discipline. Dr. Gene Preuss certainly fits those parameters. He is one of the most recognized scholars in the state and the acknowledged expert on Texas educational history. I can think of no more worthy scholar for our honor than Dr. Preuss.”