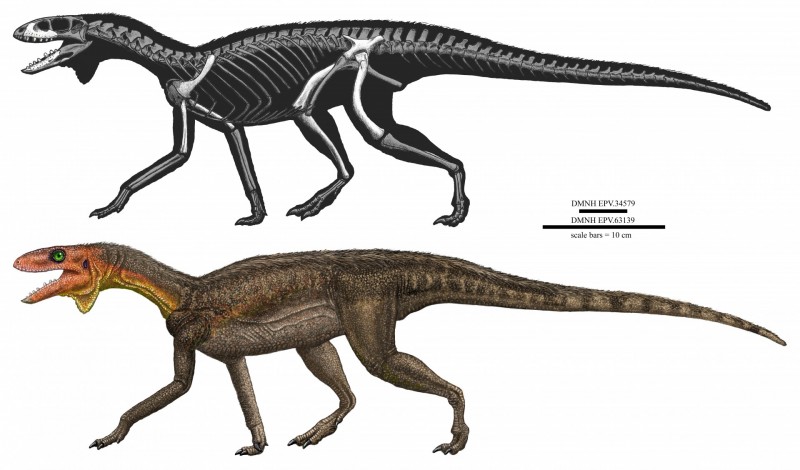 Films such as those in the “Jurassic World” series feature a range of large prehistoric creatures, but Kwanasaurus has been absent from their plots. That’s because the significantly smaller reptilian herbivore was only recently discovered by researchers Bryan Small of Colorado and Dr. Jeffrey Martz, Assistant Professor of Natural Science at the University of Houston-Downtown.

Their discovery, named Kwanasaurus williamparkeri, is a small “dinosauromorph” that existed in Colorado over 200 million years ago. It is the oldest known dinosaur relative to have lived in Colorado.

was released on Sept. 3 in the online journal PeerJ.

“The findings are from the Triassic Period, which is the beginning of the age of dinosaurs and a critical period in vertebrate evolution,” Martz said.

The species was named using the Ute Indian word for ‘eagle’ and for paleontologist William Parker of Petrified Forest National Park. Its fossils were found at Eagle Basin near the towns of Eagle and Gypsum in northern Colorado, west of Denver.

According to Martz, the Kwanasaurus belongs to a group of animals called silesaurids, which had teeth perfect for eating vegetation.

“Most early dinosaurs and dinosaur relatives had teeth appropriate for eating meat,” he said. “These animals are interesting because they are a very early dinosaur relative with teeth used for consuming plants. Their teeth are very similar to plant-eating reptiles of today, including iguanas… The discovery of these species suggests that their parallel evolution was occurring in the Triassic Period. Their teeth and jaws have similarities to plant-eating dinosaurs.”

The largest individuals of Kwanasaurus, Martz said, was approximately the size of a medium sized dog … about four or five feet in length, half of which was a long tail. In addition to its distinctive teeth, its jaws were particularly powerful to consume fibrous plant life. It also has a beak at the end of its snout.

The discovery was made during Small’s excavations in the Eagle Basin. Fossils have been collected over a 20-year period and were carefully stored and preserved for study.

“The material from this site is very fragile,” Martz said. “Extracting these bones from the rock is a delicate process, which is why the discovery of the Kwanasaurus has taken two decades.”

Small is a Research Associate in Paleontology at the Museum of Texas Tech University and previously served at the Denver Museum of Nature and Science. He and Martz have collaborated on previous articles documenting the discovery of other prehistoric reptiles of the same age, including Stenomyti (an armored reptile that looked like a cross between a crocodile and an armadillo).

During the summer months, Martz leads digs in Utah and Arizona. For the several years, he has been retrieving fossils form an Arizona bone quarry and studying them at the University.