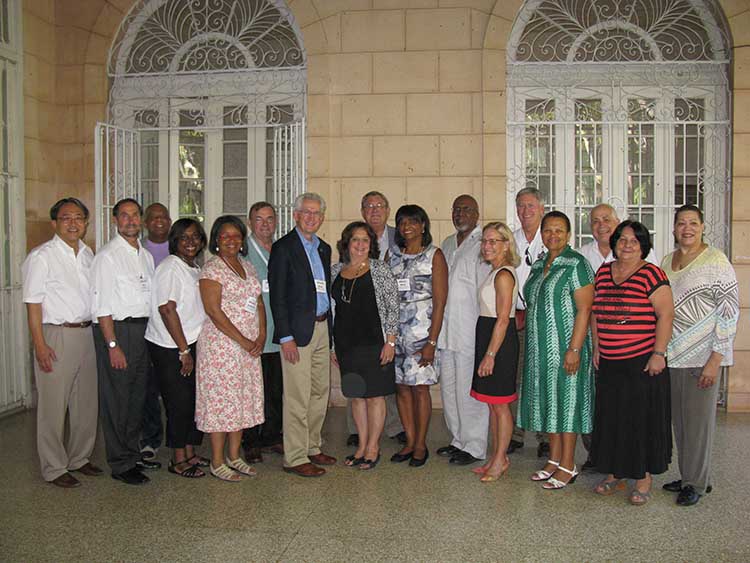 UHD President Bill Flores, and the University's First Lady Noël Bezette-Flores recently traveled to Cuba with the annual presidential mission of the American Association of State Colleges and Universities (AASCU) to forge alliances with Cuban institutions of higher education. AASCU represents more than 400 public state colleges and universities in the United States.

Flores and Bezette-Flores joined a delegation of approximately 20 other presidents and chancellors of U.S. state universities and their spouses on AASCU's inaugural trip to Cuba, following President Barack Obama's recent decision to open relations with the country. These higher education leaders convened at the National Hotel of Havana to interact with Cuban university presidents and explore potential partnerships and faculty and student exchanges between the two countries.

As a result of the relationships formed with artists and writers during this visit, UHD plans to invite some of the artists to Houston in November as a part of Houston's Citizenship Month.

"I was honored to be asked to participate in this historic academic mission to expand higher education opportunities for students in both Cuba and the United States," said Flores. "Student exchanges and travel abroad opportunities are high-impact experiences that broaden students' cultural, economic and political awareness and greatly contribute to undergraduates' global learning. Through the connections we made during the trip, I hope to increase UHD students' exposure to Cuban influences and open new doors of opportunity for our students and faculty."

According to AASCU, Aurora Fernandez Gonzalez - the Cuban vice minister of higher education - assured that exchanges between the two countries will allow participants to become more familiar with each other and identify interests that will permit relations to continue advancing.

AASCU President Muriel Howard emphasized the significance of this month's trip, as a presidential delegation of the organization visited Cuba in 2003, but the limitations imposed by the political context at the time did not permit additional alliances to be forged. At the conclusion of this trip, Howard and Fernandez Gonzalez signed an agreement to ensure faculty and student exchanges between the two countries moving forward.

"These meetings are essential for the normalization of relations between our countries and the promotion of dialogue between our peoples," said Flores. "For the past decade, AASCU has continually supported collaboration between Cuban and American universities, and we now have made great strides to initiate these groundbreaking alliances."