Back by popular demand, the Discovery Green Thursday Concert Series returns this May and June with a new title sponsor, the University of Houston-Downtown (UHD). The seasonal concert series continues to grow in popularity with attendance growing each season. What better way to enjoy the warmer weather than by spending an evening listening to some of the best musicians from the Gulf Coast at Discovery Green?

"UHD is pleased to present Thursday Concerts at Discovery Green this spring. It is a natural fit for us to join the park and support these wonderful musical performances," said William Flores, President of UHD.

Awarded "Best Concert Series" by the Houston Press, the free, family-friendly concerts begin May 3 and run Thursdays at 6:30 p.m. through June 28. Bring family, co-workers and friends to dance, sing and relax on the hill while some of the region's most exciting bands perform on the Anheuser-Busch Stage and Fondren Performance Space. Performances may be affected by weather, but unless it is raining at Discovery Green at 6:30 p.m. the show will go on!

Blankets, lawn chairs and picnics are welcome, but glass containers and outside alcoholic beverages are not permitted. Concessions are available for purchase at The Lake House, which provides fast casual food and beverages. This series is co-sponsored by Saint Arnold Brewing Company, Cactus Music, 29-95, Houston Press, 90.1 KPFT-FM, 103.7-FM and ESPN 97.5. Saint Arnold Brewing Company will offer double reward points for individuals recycling their empty Saint Arnold six pack carriers at Discovery Green during concerts on May 3, May 17 and June 14.

Grupo Fantasma comes at you at top speed with hip-shaking, horn-blaring, mind-bending Latin funk. This Grammy nominated Latin orchestra's incendiary live show has burned up the stage at festivals worldwide like Bonnaroo and Coachella. Be prepared for Prince's go-to party band to rock your world. Songstress Patricia Vonne opens the show.

New Orleans veteran of Rebirth, Lil Rascal and Treme brass band steps up front to lead his own high energy, horn driven jazz, funk, rock, soul and gospel review. Glen's performance at the 2011 Jazz Fest garnered rave reviews from the audience, The New York Times, The Wall Street Journal and many other national press outlets. "Glen seemed too big for any screen, with a Jay Z physique and a voice big enough to accommodate James Brown and Wilson Pickett," says David Fricke of Rolling Stone Magazine. Up and coming Houston funksters, The Journey Agents set the grooves in orbit to open the show.

Buckwheat Zydeco is a master entertainer and musician who spreads the joy of zydeco music everywhere he goes. He won a Grammy Award in 2010 for his Lay Your Burden Down album. After years of touring with blues and soul legends Joe Tex and Clarence Gatemouth Brown, playing piano and organ, Buckwheat joined forces with the King of Zydeco, Clifton Chenier. Clifton baptized him in the fire of zydeco and he's never stopped testifying. Buckwheat Zydeco counts U2, Eric Clapton, Keith Richards, Willie Nelson, Paul Simon and legions of other legends among his fans. "Buckwheat leads one of the best party bands in America; he can pump out zydeco two-beats or shift into rolling 12-bar blues, steaming all the way," reported the New York Times. Houston zydeco institution, The Zydeco Dots kick start the party!

New West recording artists Buxton brings dynamic instrumentation and powerful writing to their indie-infused, folk-inspired blend of Americana. The Houston Chronicle called Buxton "One of Houston's finest bands." With packed performances during SXSW and CMJ music festivals and the new release of Nothing Here Seems Strange, Buxton is poised for a break-out year in 2012. One of Houston's top pop bands, The Tontons is a soulful psychedelic blues and indie rock spectacle. Their high energy, hypnotic stage show instantly engages audiences.

Two Tons of Steel's rambunctious brand of country rooted rock and high-energy show guarantee a fun party. Whether they are performing at the Grand Ole Opry, Gruene Hall or any other great venue, Two Tons of Steel provides a sound, attitude and approach as big as Texas. Mike Stinson who calls his music "tear-in-your-beer honky-tonk and barnyard rock and roll" kicks out the country jams to start the night.

George Porter, Jr. is best known as the bassist in the seminal New Orleans funk outfit, The Meters, and has worked with Paul McCartney, Allen Touissant, David Byrne, Taj Mahal, Irma Thomas and tons of other legends. Hot off the release of his latest release, Can't Beat the Funk, he'll hit Houston with his long running solo band, The Runnin Pardners, for a funkified night of fun at Discovery Green! The Paul Ramirez Band revs up the night with an opening jam set.

The Gourds are a Texas alt-country, roots rock, Americana institution. Stellar songwriting, joyous playing and non-stop touring have resulted in a passionate following and a dynamic new album on Vanguard Records. Their latest of 11 releases, Old Mad Joy, was recorded in Levon Helm's studio in Woodstock, NY and produced by Larry Campbell. Mary McBride is a rockin' singer songwriter. The New York Times states "Her voice is part angel, part truck driver, as if to say sometimes you power through sadness and sometimes you hope for a miracle.

Providing explosive Latin ska and shining pop rock, Los Skarnales can barely be contained by any stage. Force of nature and band leader Felipe Galvan has the vertical leap of an NBA star, the style of a pachuco kingpin and the pipes of a classic soul shouter. The Wild Moccasins, New West recording artists on the vanguard of the Houston music scene and a sought-after export to other music towns, generate excitement and delight fans at home and on tour with their cleverly-constructed pop tunes.

For more information on the 2012 Spring Programming Season at Discovery Green, sign up for our weekly 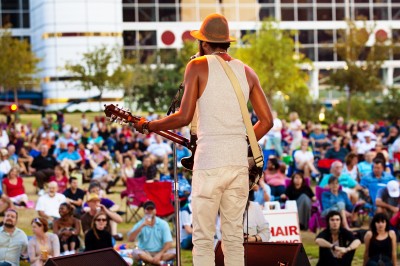