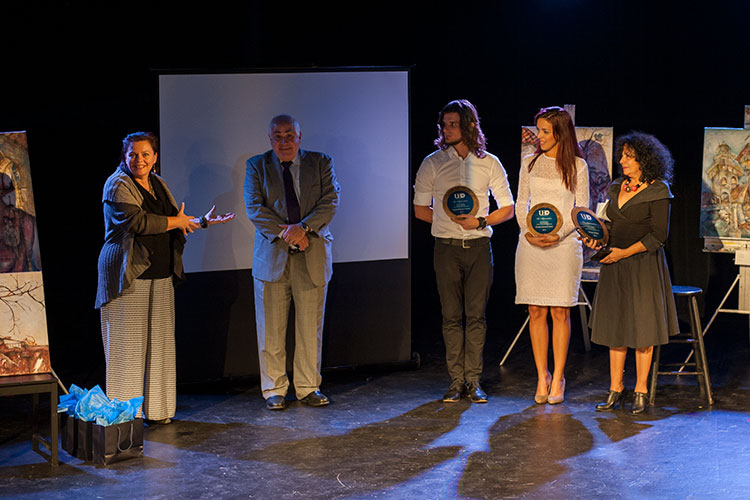 During a recent visit to Cuba, UHD President Dr. Bill Flores and First Lady Dr. Noël Bezette-Flores formed a relationship with three Cuban artists — immediately seeing value in inviting them to visit UHD. To increase UHD students' exposure to Cuban influences and open new doors of opportunity for our students and faculty, the University invited the artists to take part in Houston's Citizenship Month.

Throughout their visit, the three visited art and theater classes and met with students. Mark Cervenka, director of O'Kane Gallery and associate professor of art, was fascinated with Ileana Mulet's presentation during one of his classes.

"Ileana provided a wonderful overview of her experience as an artist in Cuba, but more broadly how she came to be an artist — her education, her influences, the flexibility of an artist to work in various fields and media, and her own vision and seriousness with which she approaches her work," Cervenka said. "One of my students approached me after the visit and said the discussion and visit with Ms. Mulet in the figure drawing class was really inspiring."

Paul Mandell, Ph.D., assistant professor of Spanish and applied linguistics, who served as a translator for the visitors, was pleased with how the performers connected with students during their visit to UHD.

"It was a delight listening to Ileana, Claudia and Reynier interact with students as they visited classes, whether they were speaking about their own experiences as artists in particular or of the state of life nowadays in Cuba in general," Mandell said. "The information they shared was candid and revealing, and it welcomed students into dialogue. It was good as well to see how welcoming our students were to them, genuinely curious and engaging our guests."

The event began with a networking reception in UHD's O'Kane Gallery. A showcase of the artists' work followed in the adjacent O'Kane Theatre. The showcase took the form of a presentation in which images and videos were interwoven to demonstrate work by the three artists. A dramatic monologue explored their creative processes, and Ileana Mulet ended the program with a presentation of her work. The program closed with an interactive Q&A in which audience members asked the three artists about their work and culture.

Ileana Mulet creates art through paint, sketches and design. A graduate of the San Alejandro Academy of Fine Arts, she has held exhibitions including "The Kiss of the Salamander," a 2008 exposition of poems and paintings completed in the House of Poetry of Old Havana. She received the Diploma of Recognition by the Cuban Ministry for Culture in 2000 for contributing noteworthy work in culture.

Claudia Mulet, a dancer and aspiring actress, is a graduate of the Superior Institute of Art (ISA) with a specialization in theater arts. She began as a flamenco fusion and contemporary dancer in the Lizt Alfonso Ballet Company. In 2009, she performed with Ileana Mulet in the "Bodies" exposition at the Basel Art Fair and the Gómez-Mulet Gallery in Miami.

Rodriguez is a theatrical director and a graduate of the University of Havana. His masterwork as director is "Goldfish," a staging that took place during the 15 International Festival of Havana 2013 and the National Festival of Camagüey 2014. His most recent work as artistic director is "Anesthesia," in which Claudia Mulet starred and which was presented this year in the Bertolt Brecht Theater in Havana and the Festival of Norwegian Theater.