The UHD powerlifting club team placed second at the World Association of Benchers and Dead Lifters (WABDL) World Bench Press and Deadlift Championships Sunday, Nov. 6 in Reno, Nev. The team finished with 284 points out of a possible 300, and just four points behind the winning team, Team Headquarters of Seattle, Wash. This is the highest point total and finish for the UHD powerlifting team at the WABDL World Championships, which the team also contested in 2009 and 2010.

UHD's second-place finish was also the highest a collegiate team has placed at the World Championships in the history of the WABDL. UHD defeated approximately 13 other teams, including the national teams of Brazil and Finland, all-star teams representing the states of Nevada, Maine, Texas, Arkansas, Hawaii and Colorado, as well as two other collegiate squads. Approximately 550 lifters were entered in the meet.

The outstanding performance in Reno was truly a "team" effort. I was especially pleased with how UHD lifters conducted themselves both on and off the platform, setting a great example of sportsmanship, discipline and teamwork, while also being tremendous ambassadors for the University of Houston-Downtown. 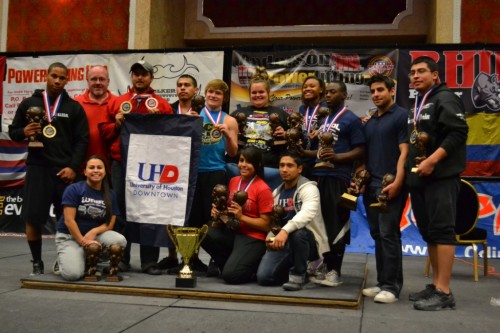