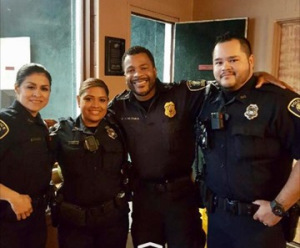 The holiday season is a time to gather with loved ones and celebrate the holidays. Our schedules become chock-full of travel plans, gift buying, meal planning, and endless to-do lists. The culmination of all this planning and prepping is the joy of sitting down with family and friends for a large, delicious meal.

But for some members of the Houston community, it's a struggle just to put food on the table. So, the compassionate officers from the University of Houston-Downtown Police Department (UHDPD) decided to give thanks for their blessings by blessing another family with the gift of a Thanksgiving feast.

"We didn't know who it would be, but we decided that we were going to feed someone," said Sgt. Trinity Delafance. "We went to Luby's and priced a full dinner—turkey, ham, and all the trimmings—for a large family, which was around $80, and we all split the cost."

The officers pooled funds and found a family in need with the help of KCOH-FM, a local radio station. The station found a family of seven. Marquita Sykes, a single mother and University of Houston student, is raising six children, two of them have autism.

"The officers that were present when we gave the family their food were very emotional," said Delafance. "The family was so appreciative. This is what it's about. We all get so distracted during the holidays, but if one person did this for just one other person, it would make such a difference."

The officers decided to make this a tradition with the hope that it becomes bigger and better each year. They've even issued challenges to other agencies to join them.

"It benefited the family, but I think it also benefited our department as a whole," said Delafance. "This was something that the department has never done before, and it gave the officers a chance to show the other side of policing; you only see one side in the news all the time."

KCOH Radio Host Jerri P. Beasley spoke poignantly about the officers' role in the community. "This is what happens when you have good leadership," said Beasley. "There's so much negativity and so many things have been said about law enforcement, and to have a leader such as yourself who's going to say that's not going to happen on my watch. My team and I are going to give. We are going to be a blessing."

"It wasn't about publicity," said Delafance. "It was about providing a family with a basic need. When I go home at night, I know there will be food on the table. Some people don't have that luxury."

UHDPD will continue to spread holiday cheer by donating toys for Christmas to underprivileged children at an elementary school in one of Houston's Northside neighborhoods.

"When we train new officers, we train them on the Northside," said UHDPD Investigator Raymond Jenkins. "We get gas at the Chevron near the school, and some of the officers grew up in this neighborhood, so we know the conditions. Some of these kids wouldn't get Christmas gifts without donations."