UHD O'Kane Gallery Exhibits 'Journey to Sirius: A Survey of the Works of George Smith' 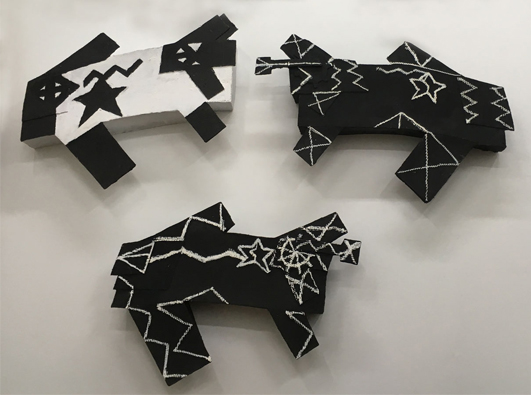 The University of Houston-Downtown (UHD) O'Kane Gallery is exhibiting "Journey to Sirius: A Survey of the Works of George Smith" through Dec. 15. The show is a survey of Smith's work from the early 1980s to the present. It includes wall and floor pieces, pieces in painted steel, maquettes and multi-media works.

Smith is inspired by African architecture. Several wall pieces in the exhibition are inspired by the traditional African society known as The Dogon in the West African Republic of Mali. The pieces refer to the "dog" star Sirius, known to the Dogon people as "Po Tolo." This indigenous tribe is believed to be of Egyptian descent. Their astronomy legends date back before 3200 BC, and the accuracy of their cosmic knowledge has baffled scientists.

"For more than 10 years, I have been producing sculptures inspired by The Dogon," said Smith. "This fascinating African society resides in a spectacular rocky region of the Republic of Mali called the Bandiagara Escarpment. On the face of the cliffs, The Dogon create their art and architecture, which consists of carvings and drawings representing mythical ancestors that are part of their elaborate cosmology, including the mythical star, Sirius."

Smith also refers to the Nommos in his work. The Nommos are ancestral spirits worshipped by The Dogon. They are described as humanoid beings with fish scales responsible for bringing water to the region as well as fire and thunder.

Other works by Smith retrace the checkerboard patterns found on West African structures. Smith's more recent work is reminiscent of the hieroglyphs of the Dogon, which carry the cosmology and mythology of the people.

George Smith is a respected sculptor and professor emeritus at Rice University. His works have been exhibited in galleries and museums throughout the United States. One of his sculptures, Bandiagara, is located on the UHD campus next to the Student Life Center.

UHD O'Kane Gallery Exhibits 'Journey to Sirius: A Survey of the Works of George Smith'