By: Richard Sebastiani, Director of Sports and Fitness

The UHD men's basketball club team clinched the division title in grand fashion with a win over Houston Community College-Central with a score of 62-24, on Saturday, March 24, at the UHD Student Life Center. The Gators (7-1, 10-2) scored their highest point total of the season while also giving up its season low in points. With this victory, UHD will host the Houston Club Sports Basketball Conference tournament first round game Friday, March 30, at 7:30 p.m. in the Student Life Center against Houston Baptist University. If the Gators win this game, the team advances to the conference semi-finals at 2 p.m. Sunday, April 1, at Texas Southern University.

Every player on the UHD squad scored Saturday. Domonique McKinney led all scorers with 12 points while Mo Sharif added ten. The Gator defense forced numerous turnovers as not one HCC-Central player scored more than 5 points. The game featured a great half-time performance by the UHD student dance team, Synergy, which electrified the crowd with gravity-defying dance moves.

Admission to all games is free. The Gators' season schedule and scores can be viewed at 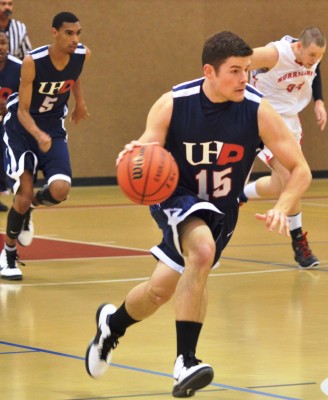