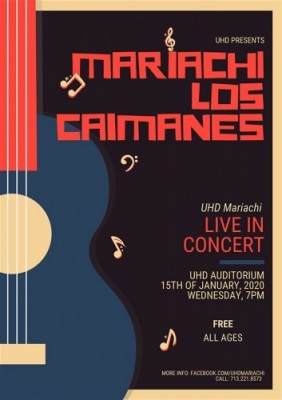 The University of Houston-Downtown (UHD) is kicking off 2020 in musical style by hosting the debut concert from its new student mariachi group.

Mariachi Los Caimanes (Spanish for The Gators) will make its concert debut at 7 p.m., Wednesday, Jan. 15 in UHD’s Wilhelmina Cullen Robertson Auditorium. This performance is free and open to the public. Reservations can be made here.

Comprised of more than 20 students from varied musical backgrounds, the group came together during the fall 2019 semester after encouragement from UHD President, Dr. Juan Sánchez Muñoz. Directing the ensemble is Jose Vazquez, assistant director of Student Activities.

“It has been a thrill to see the growth of the students and the ensemble,” said Vazquez, who comes from an extensive musical background. “There is a wide ranging display of talent among these musicians, and it has been a pleasure to put it all together.”

Mariachi Los Caimanes, supported by the Office of Student Affairs, made its public debut on Halloween 2019 to honor the Day of the Dead celebrations. Since that initial performance, the group has been rehearsing diligently to prepare for its first full concert. That debut performance (which took place in the Mural area) and its practice sessions have generated a buzz among the UHD Community.

“I cannot count how many phones were livestreaming during our first unofficial performance on Halloween,” he said. “And during our earliest rehearsals, it was not uncommon for folks walking down the hallway to step in and watch what we were doing.”

According to Vazquez, concert-goers on Jan. 15 should expect mariachi standards, as well as contemporary pieces with new arrangements. More importantly, he noted that the audience should anticipate a fun event that not only showcases music, but the joy it brings to the community.

“As a Hispanic Serving Institution, a mariachi group is important for several reasons,” he said. “It fosters a sense of pride in the school and serves as a wonderful connection to the surrounding community. I've already witnessed how this group has become a support system for the students who are part of Mariachi Los Caimanes. Seeing friendships forged over music is awesome to see, and audiences will soon see this for themselves.”