During the last weekend of January, the Texas Council of Teachers of English Language Arts (TCTELA) met in 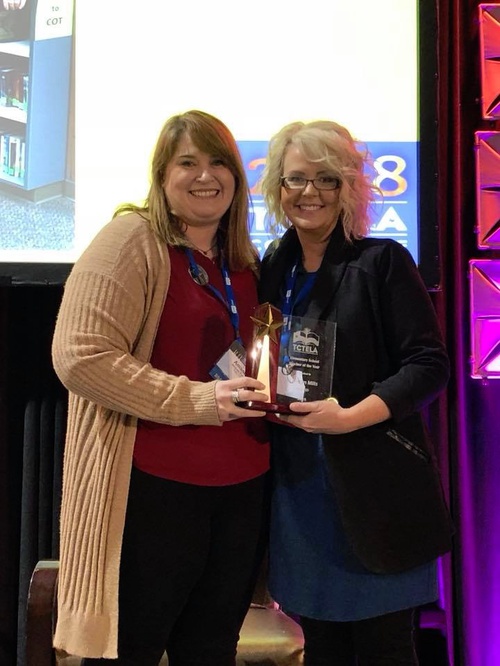 Galveston for its Annual Conference, "Fueling Our Fires to Thrive as Teachers: An Energy Exploration." More than 800 literacy educators from all regions of the state gathered to learn more about their craft and glean inspiration from nationally-recognized educational leaders and notable authors.

The University of Houston-Downtown's impact was felt throughout the conference proceedings.

Dr. Diane M. Miller, a literacy faculty member in UHD's Department of Urban Education, moved into the second year of the three-year presidential term and will now serve as the TCTELA President for 2018. Her active involvement in this conference included coordinating the highly competitive conference proposal review, introductions of speakers (including Houston's Poet Laureate, Deborah D.E.E.P. Mouton), and three concurrent session presentations. She gathered educators from several area districts that were impacted by the recent flooding and led a panel discussion about the state of schools post-Harvey. Additionally, she co-presented with her colleagues from the Department of Urban Education—Dr. Franklin Allaire and Dr. Bernardo Pohl—on the importance of literacy both across and within content-area instruction.

"More than 20 years ago, TCTELA was there for me as a beginning teacher," Miller said. "I owe so much of my professional growth to the literacy educators who worked to make TCTELA such a vibrant, powerful resource. I am so thrilled to continue that work for 21st-century Texas teachers and their students."

University students— eight Urban Education majors and two English majors— received the Pre-Service Teacher Conference Grant. These students received complementary conference registration and accommodations (valued at $550) in exchange for approximately 10 hours of volunteering. Among the students attending the conference was Adrienne Carrington, a junior majoring in English major. At the conference, she shared her poem "Why We March," at a reading event.

"I have learned a lot and met so many amazing, talented people who gave me inspiration," Carrington said.

Also participating in the conference was December 2017 UHD graduate Heather Echols, who transitioned from student volunteer to a TCTELA board member. After volunteering for the 2016, 2017 and 2018 conferences, she accepted the board's nomination to begin serving as the Pre-Service Teacher Committee Chair.

Another UHD alumna Kathryn Mills, who teaches for Katy Independent School District, was named Elementary Teacher of the Year. Although she encountered major family-related struggles during her time as a UHD student, she credits her fellow Gators and Louis Evans, the executive director of Off-Campus Locations & Online Coordination, with his support and refusing to let her give up before graduation. Mills gained national attention when she created the Facebook group, "Hurricane Harvey Book Club." What began as an effort to connect her current and former students to books during such an isolating and challenging time grew to worldwide phenomenon. The group exploded with more than 70,000 members. Miller also met with the UHD student volunteers for dinner on the last night of the conference where she shared survival tips, teaching wisdom, and even posed for several selfies.

Historically, UHD faculty and students have built a strong foundation for this level of involvement. Former Urban Education faculty members Dr. Carol Bedard and Dr. Kim Pinkerton have served presidential three-year terms, and they, along with College of Public Service Dean, Dr. Leigh Van Horn, also served a three-year editorial term for the group's award-winning journal, English in Texas. At the 2015 conference, Van Horn was recognized as University Educator of the Year. UHD students, numbering from 10-15 each year, have served as volunteers for the conference thanks to the organization's grants.

Conference attendees left Galveston Island refueled and re-energized to continue the worthy work of literacy education for the students of Texas. Now, TCTELA members are looking forward to the 2019 Annual Conference, "Beyond Boots, Borders, & Books: The Many Faces of Literacy in Texas," in San Antonio. Visit www.tctela.org for more information.