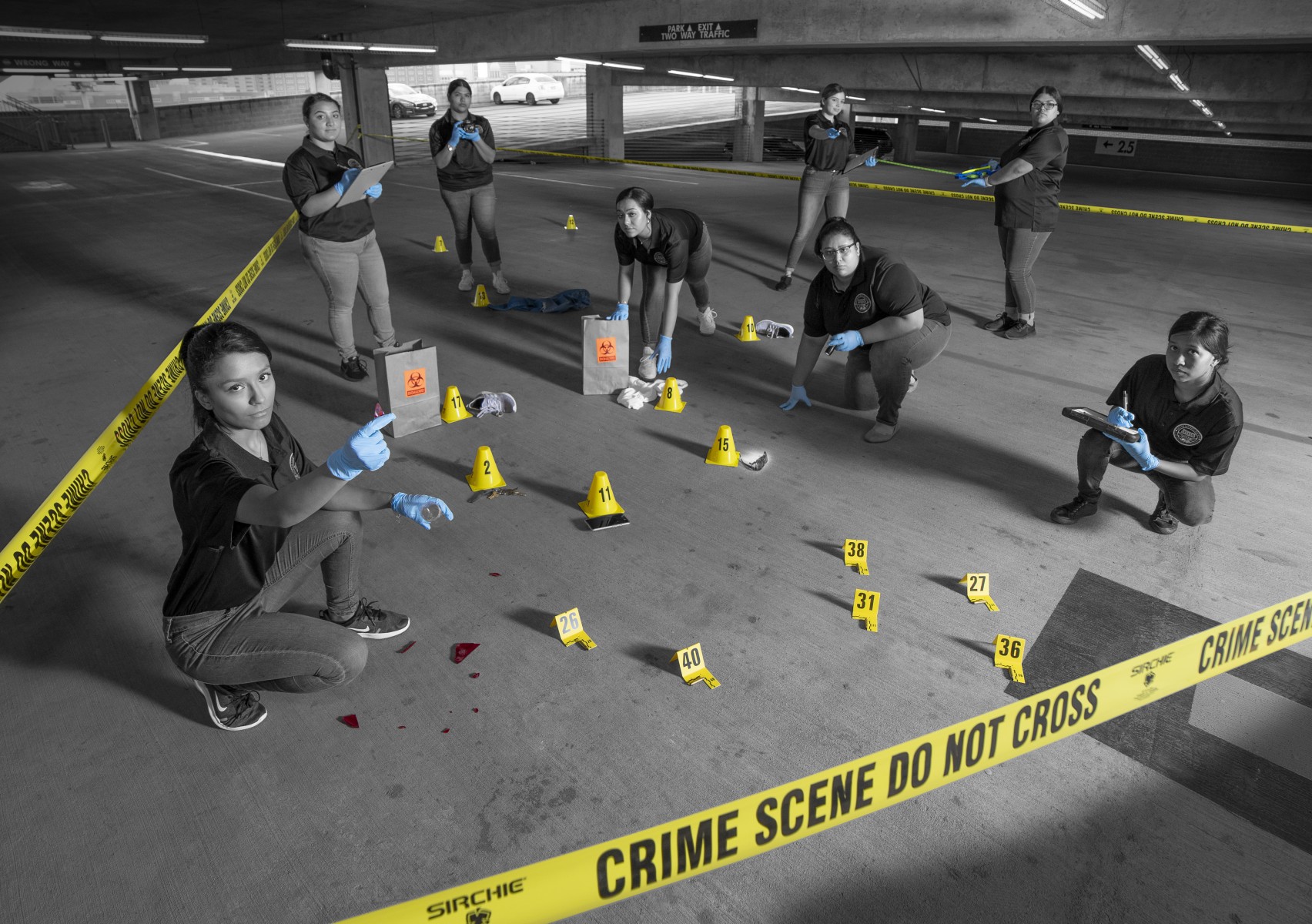 When a crime occurs, law enforcement professionals must meticulously inspect evidence and the surrounding environment. The process is painstaking, as any misstep may affect the outcome of a police investigation

As early as their freshman year, UHD criminal justice students are being trained for crime scene investigations (CSI). They’re also testing their skills at regional competitions.

Credit student organization Scene Investi-Gators (based within the College of Public Service) for engaging these aspiring practitioners. The group, guided by criminal justice faculty members Dr. Elizabeth Gilmore and Kevin Buckler, is part of a University-wide initiative to engage first-time-in-college students in their respective academic disciplines. Gilmore founded the organization and serves as its primary adviser, using her expertise in crime scene investigations to guide students.

“The group meets regularly and engages in a series of practicums and lectures to learn the process of crime scene investigations, which covers the documentation, collection and preservation of physical evidence,” Gilmore said. “This process is performed chronologically and very methodologically, similar to how one documents a scene. It’s excellent preparation for future law enforcement professionals and a great way for students to bond with one another while learning.”

During the fall 2019 semester, the Scene Investi-Gators ventured to the Southwestern Association of Criminal Justice (SWACJ) Annual Meeting in Houston and participated in a CSI competition. Competitors included colleges and universities from throughout the region.

In preparing for the contest, students engaged in mock investigations complete with simulated evidence (bullet casings, fake blood) and weekly meetings with Gilmore and Buckler.

“My first experiences with criminal justice were the things I saw on TV,” said student and Scene Investi-Gators president Jessica Castillo. “But I’ve learned at UHD that what is presented on TV is an exaggeration. I’ve gained knowledge and skills that can make a difference in solving crimes and upholding the law.”

During the SWACJ competition, Castillo and fellow Scene Investi-Gators formed two teams. They each were presented with a mock crime scene and had to follow the appropriate investigation procedures within a set time. This protocol included securing the scene; identifying, documenting and properly handling evidence; and many other critical steps in the investigation.

Team members assumed roles reflective of those on an actual CSI team: note taker, evidence collector, sketcher, photographer and team leader. They also had to prepare a detailed report to submit to competition judges.

By the competition’s conclusion, both of the Scene Investi-Gators teams were among the top three finishers.

“This was their first time to attend this type of contest, so to finish in the top three is great,” Gilmore emphasized. “These teams worked hard and are still working hard to prepare for the actual investigations that await them when they are law enforcement professionals.”

Beyond the competition, the Scene Investi-Gators club itself is validation for its members that they selected the right institution to provide the skills needed for successful careers.

“I always knew I wanted to serve the public,” Castillo said. “UHD has a great criminal justice program that is located near the courts, correctional units and law enforcement agencies. And, its faculty members are excellent. I knew that if I wanted a career in criminal justice, UHD was the University for me.”