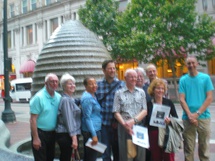 The tour, which Barnard launched, began at Main and Rusk Streets, and ended at The Honeymoon Café and Bar. Tour participants explored and discussed the stones used to construct buildings on Main Street; developed an understanding of rock styles; visited and discussed examples of each type of rock: igneous, sedimentary and metamorphic; and interpreted the earth's history in the stone observed.

The tour was well received and was attended by several members of the Professional Tour Guide Association of Houston (PTGAH) as well as PTGAH President Phil Stewart.

Barnard said, "Once members have done the tour with me my hope is that they would be confident enough, with guidebook in hand, to lead it themselves."