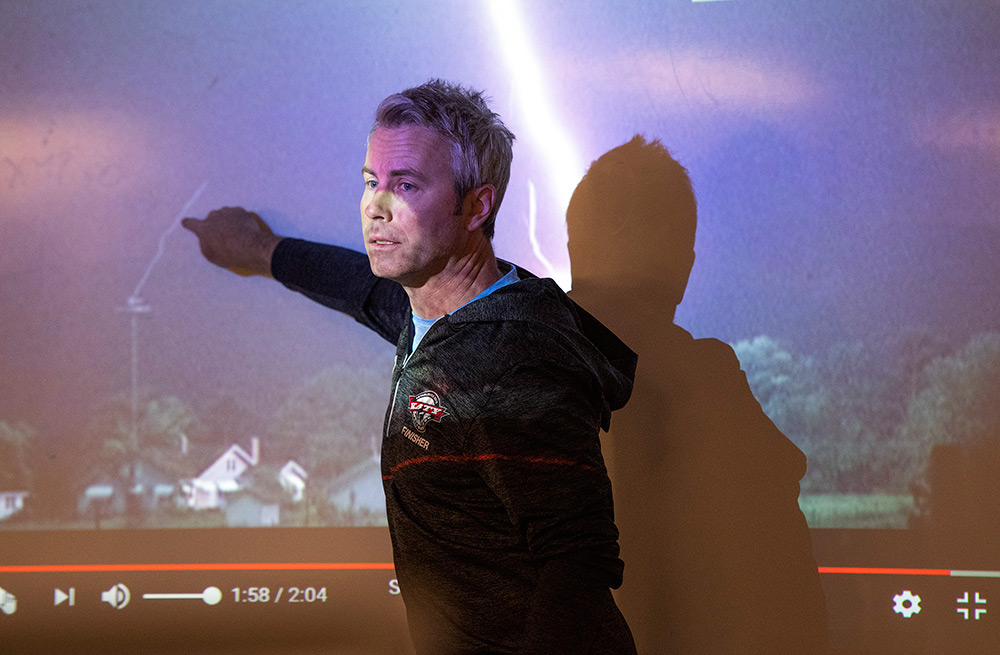 By day he’s a science lecturer at the University of Houston-Downtown (UHD) and by night and weekends, he’s the witty, crazy sock-wearing weatherman from KPRC Channel 2.

That’s right Gators, Lecturer Justin Stapleton has been teaching Introduction to Meteorology for non-science majors at UHD for the past three years—a gig he truly enjoys. And it’s apparent when you see him teach and interact with his students.

On the day UHD News attended class, Stapleton was lecturing on thunderstorms. He typically will plan his lecture based on the local and national weather forecasts—on this day he lectured on both the thunderstorms Houston was experiencing and the wildfires in California.

“It gives the students a real-world opportunity to see someone that uses this material not just in an academic setting,” Stapleton said. “I feel like I can bring in this and say here’s how I use it every day.”

Stapleton’s students don’t realize he is a television meteorologist until later in the semester.

“Most of my students don’t know because I don’t think they watch a lot of television,” said Stapleton.

When senior accounting student Stephen Pyziak walked into class at the beginning of the semester he said he felt like he had met this lecturer before.

“I felt like I knew him well and sure enough he was the channel 2 weather guy I see in the morning in my living room” Pyziak said.

Pyziak notes that Stapleton is a refreshing teacher who easily gets the students to connect with the material.

“I’m from Denver where the weather impacts your day-to-day life regardless of the season, but Houston can have some extremes and it’s nice to there see is a method to the madness,” Pyziak said.

Stapleton has never been a 9-to-5 kind of guy, hence the reason why he got into this line of work. He loves the diversity of doing a live shot, being called in to do the morning show or being out in the community. He also travels to Tucson, Arizona about month a month to visit his 10 and 12-year-old daughters.

“I like to stay active, but not busy.” said Stapleton, “You create new ways to use your brain so you don’t get soft doing the same thing all the time.”

Stapleton truly enjoys teaching at UHD and is excited about the potential for growth in the program.

“Dr. Philip Lyons has a real good vision for how he wants to expand the curriculum, not just with this class but in terms of atmospheric science education for the department,” Stapleton said. “We are talking now about creating additional courses maybe something that’s more advanced in terms of meteorology, not just for non-majors but maybe something for students who may be transferring to Texas A&M University for example.”